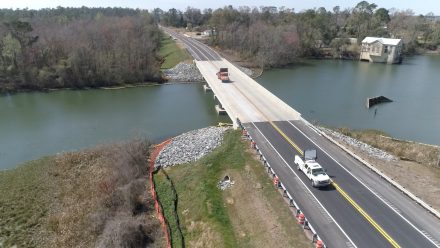 The Spring Creek bridge was built in 1957, and has been showing signs of wear and age, necessitating a replacement.

Motorists driving along Spring Creek Road will no doubt have noticed something new and hard to miss: the new bridge over Spring Creek. Having been under construction since August of 2019, the new SR 253 bridge was built to keep up with current standards.

Juanita Birmingham, District Communications Officer for District 4 of Georgia DOT, spoke with the Post-Searchlight about how and why the bridge was replaced. “Georgia DOT inspects all bridges in the state, even those not on the state route system, every two years,” she said in an email. “The Department recommended replacement of this bridge due to several reasons. First, the age of the bridge, which was built in 1957. The design vehicle used back in those days was below current standards.”

She also stated that, while the bridge was not unsafe, it was showing signs of age and wear, and its condition was classified as “poor to satisfactory, with some concrete spalling (when small pieces of concrete break off due to weather or other factors), some concrete cracking and some minor scouring of the columns.”

The construction contract was in the amount of $ 10,568,895.60, however with costs of preliminary engineering and right of way acquisition added on, the project’s total cost was roughly $12.1 million. The contract was awarded to Southern Concrete Construction Inc.

Aside from this bridge project, another bridge replacement contract was awarded in 2021, for the Attapulgus-Climax Road Bridge over Callahan Branch, in the amount of $1.7 million.

“GDOT is pleased to provide Decatur County with a modern bridge that better suits today’s vehicles, reflects current design standards and enhances safety for drivers, pedestrians and bicyclists,” Birmingham said. “We’re also pleased that we were able to do so without putting in a detour. Building the new bridge adjacent to the old saved drivers travel time. People seem very happy with the finished product, judging from the reaction on our social media.” She concluded, “There is still minor work left to be done, which may require lane closures. Grassing season begins in April so you can expect to see grass planting and removing the silt fence sometime after that. We appreciate the continued patience of drivers during this final phase of the project.”