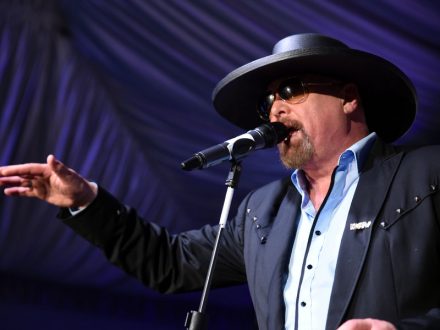 Eddie Montgomery will take the stage next weekend at River Town Days, following a day of music and festivities.

River Town Days is back after a two-year hiatus due to COVID-19, and bringing back some old favorites, such as The River Rummage and a good old-fashioned barbecue competition.

Chamber President Lauren Minor gave a rundown of what the one-day event will look like.

The festival begins at 9 a.m. with the River Rummage and other local vendors opening. It is also the start of the Cornhole Competition registration.

The River Rummage was an old favorite started by former Chairman Keith Lyle.

Minor said it has been over six years since the last River Rummage, but this year’s rummage sale will allow visitors to find everything from “Pink flamingos to Picassos.”

Those interested in participating in the sale can sign up the day of and will be provided a booth. Once in the booth, they can sell any trinkets, used clothing or goods they think others may find as a treasure.

Minor said currently they have five individuals who have booths at the River Rummage, including Milestones Pediatric Therapy’s Yard sale.

The Rummage sale will extend down Hatcher Road and last until everything is sold out.

Following the start of the day, the kid’s inflatables and rides will open at 10 a.m. and last until 6:30 p.m. right before the opening act of headliner, Eddie Montgomery.

When the kids are ready to take a break from the rides, they can participate in the Home Depot Kid’s Workshop, which allows them to paint and create their own wooden creations.

At 11 a.m., the first competition of the day kicks off with the cornhole tournament, followed by the first band performance of the day.

During his performance, those interested can head over to the Mega Ramps at approximately 3 p.m. for a weigh in.

Florida area high schools will be hosting a bass fishing tournament, where Minor predicted roughly 170 students are expected to weigh in their catches, before announcing the winner.

Only a short while later, the Chamber will announce their own winner of the River Town Days Boston Butt Barbeque competition, which currently has 14 local businesses competing.

The winner will win the money in the pot, which is totaling approximately $700 as of right now and bragging rights of having the best “butt” in town.

Minor said although they used to offer barbecue samples for the People’s Choice Awards, the Boston Butts will be used as the primary meat at the Sponsor’s party that evening.

“We really just wanted to have this as a reason for healthy competition and camaraderie,” Minor said.

Following the competition, the Michael Miller Band will go on stage at 5 p.m. and close out at 6:30 p.m. to make way for Eddie Montgomery.

Montgomery is well known for being in the duo Montgomery Gentry and their hit songs, “Something to Be Proud Of” and “Where I Come From.”

During the concert and throughout the day, Diablo’s will be offering beer. The beer tent will be cash only, but their will be an ATM on site.

The festival is sure to have something for everyone and Minor hopes to see everyone out there.
For more information, visit rivertowndays.com.