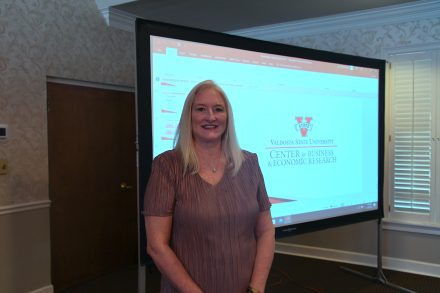 Dr. Cynthia Tori, an economics professor from Valdosta State University, spoke on the record high inflation, and factors contributing to it, at Thursday’s Chamber Connect luncheon.

Members of the Chamber of Commerce gathered at the Country Club on Thursday for the monthly Chamber Connect luncheon. The guest speaker of the day was Dr. Cynthia Tori, a Professor of Economics at Valdosta State University, who spoke on the current inflation and economic condition of Bainbridge.

“In the early 2000s, there was an article in Newsweek or The Economist that said ‘Inflation’s dead. We’ve learned so much after going through the inflation of the 70s and early 80s, and inflation was down to around 2%, we’ve conquered inflation,’” Dr. Tori recounted. “And here we are now, with inflation.”

Inflation, according to Tori, is at a 40 year high, with the annual inflation rate as of this January at 7.5%.

“When we were first experiencing inflation, the central bankers and talking heads were all saying, ‘Don’t worry, it’s transitory, it’s temporary, it’s not gonna stick around!’ And yet here we are, over a year, experiencing higher and higher rates of inflation, and increasing prices,” she said.

Some of the reasons she gave for the continuation of inflation included labor shortages, supply chain issues, and government policy. According to data she presented, Decatur County’s current unemployment rate is 2.4%, down from highs in 2020.

“But the thing about an unemployment rate, is it can disguise really what causes the decline,” Dr. Tori said. “Is it because there are new jobs, and therefore fewer people are unemployed, or is it driven because the labor force size has declined?”

The labor force is of course defined as the total number of people who are employed, as well as the unemployed that are currently looking for a job. According to Tori’s presented figures, the local labor force size has shrunk, partly due to older members of the labor force retiring, and partly due to inability to recruit new younger workers.

“The government said ‘Do not go to work. You cannot go to work.’ In some communities they shut everything down,” Tori said. “To replace that, the government instituted enhanced unemployment benefits. They provided additional funding to people that have young children. There was a flow of trillions of dollars into the community.”

This flow of money increased government debt, and when combined with federal reserve policy, and government energy policy, it all exasperates inflation.

“I want a clean environment too,” she said, “but all of the new clean energy, the ability to replace petroleum energy with clean energy, the technology is not fully there. If you still have the same demand for energy, but less supply, the price is going to increase.”

According to Dr. Tori, future uncertainties that may prolong or impact inflation in the coming year include new COVID variants, the previously mentioned labor problems and government policies, as well as foreign conflicts, namely involving Russia and Ukraine, and China and Taiwan.

Not ending on too dreary of a note, she also mentioned strengths that may help in the future, such as COVID being endemic, with both medical treatments and natural immunity as ways of keeping it from shuttering the economy, and Georgia’s status as a business destination.

“So for 2022, the forecast is for continued growth, and stronger growth at the national level. There is some risk, that probability of recession is slightly higher… it’s probably more like 30 or 35% chance of a recession… Inflation is a problem, it’s not something we haven’t experienced before, and we know that sometime in the future, it won’t be.”