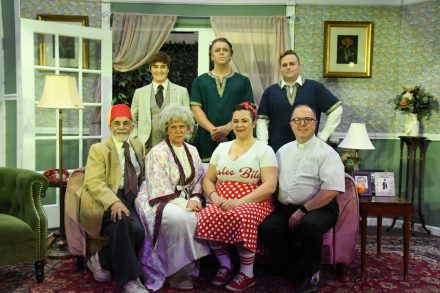 The cast of Leading Ladies takes a break from dress rehearsal on Monday night to smile for a picture.

Set in the 1950’s, Leading Ladies focuses on two English Shakespearean actors, Jack (Wes Chapman) and Leo (Stevie Hall), who find their careers in a rut. They are currently performing “Scenes from Shakespeare” on the Moose Lodge circuit in the Amish country of Pennsylvania, when they hear that an old lady in York, Pennsylvania is about to die and leave her fortune to her two long-lost English nephews.

Hearing this, the actors resolve to pass themselves off as her beloved relatives and get the cash. Hilarity ensues when it turns out the relatives are actually nieces and not nephews. Things get even more complicated when Leo falls madly in love with the old lady’s vivacious niece, Meg (Krystal Apke), who’s engaged to the local minister (Deryl Outzs).

Wimberley said she was on the Reading Committee last year, when they were presented with the first read of Leading Ladies, and she fell in love with it and the idea of directing it.

“When the chance came, I volunteered and it’s been incredibly hard and super rewarding so far,” she said. “I’ve had an incredible cast to work with.”

While Wimberley wants everything to be just perfect, she has strayed away from any former Leading Ladies performances.

“I’ve steered clear of watching any production of it, because I wanted to have my own vision of it,” she said. “But, I do plan on watching it after to compare it to what we did.”

While this may be Wimberley’s directorial debut, she said she would love to direct again.

“I’ve done everything from producing to marketing and being on the Board, but this is a completely different ball game,” she said. “I’ve always loved the theater and so it’s nice to see how everything works behind the scenes for once.”

To see Wimberley’s debut, viewers can purchase tickets for $15 for adults or $12 for children. Due to the suggestive nature and cross-dressing, Wimberley suggests viewers be high-school age and up.