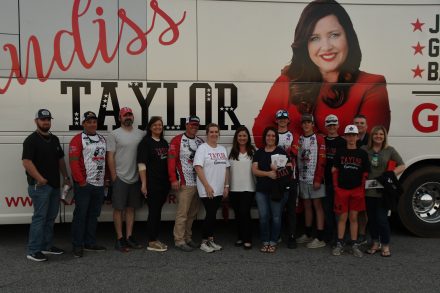 Competitors in the Bass Tournament over the weekend stopped in to listen and meet Kandiss Taylor at J3 BBQ on Saturday evening.

Another political candidate paid J3 BBQ a visit Saturday evening. This time, it was Kandiss Taylor, candidate for governor of Georgia. Born in Baxley, Taylor served for roughly 19 years on the Appling County Board of Education as a counselor and coordinator. She also has a Bachelor’s degree in Early Childhood Education and Teaching and a Master of Education in School Counseling, both from Georgia Southern University. Taylor previously ran for office in the US Senate in 2020.

“I felt like 2020 was hijacked, and I’m plenty ticked off about it,” Taylor said, “and I’m pretty ticked off every time I go to the gas pump.”

Having made a stir with her slogan “Jesus, Guns, and Babies”, Taylor took shots at the current political parties in her Saturday speech. “I am tired of the career politicians, I’m tired of the establishment, both sides… Republican or Democrat… I don’t like any of them.” She also took jabs at her two biggest opponents, Governor Brian Kemp and Senator David Perdue, saying, “… they’re the same person. Y’all can choose from them if you want to, or y’all can choose me.” She expanded on this to the Post-Searchlight in an interview, saying, “They’re both career politicians. Perdue only served one term, but he’s been in politics his whole life. His family is politics; his first cousin was governor for two terms, and Governor Kemp has been in it for 20 years… whether he was serving himself or the people I don’t know, but he’s been in it for 20 years.”

Aside from having political outsiders represent south Georgians, who Taylor described as being “underappreciated and forgotten”, other focuses of her campaign that she mentioned included the importance of small businesses, problems with the prison system, the right to life, Chinese influence in US, and election reform.

“With 2020, I was very upset, and I felt like, if we don’t get our right to vote legal and secure, we’ll lose our country,” Taylor said. “I really felt that God was putting it in my heart to put morality over money, and we’ve heard a lot about China influencing our elections, and Hollywood having such a big influence in Georgia. I just really felt it pressed upon me to put morality over money in Georgia, and that our elected officials aren’t doing that. They’re being sold to the highest bidder.”

“I would just say that, the main thing is getting representation that’s like us, and not just voting for a celebrity,” she said in closing, “Do your due diligence, and do your research, and research every candidate, and see which one represents you the best… But do vote. Don’t stay home, this is not the time to stay home, we may not have a country in two years. We have to vote, we have to vote with who represents our values.”