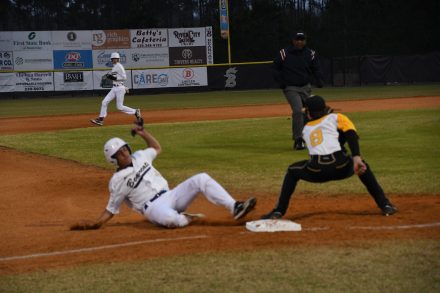 Cason Priest is called safe after he slid into third base during the game against Worth County on Monday night.

The Bainbridge Bearcats are on a two game winning streak after blowing out Port St. Joe 15-0 on Saturday and winning at home Monday night over Worth County.

The Bearcats got on the board in the first at bat of the first inning, when Ryles Burch singled before Chase Parker grounded out, scoring Burch.

Priest got the win for the Bearcats. He went four innings, allowing zero runs on three hits, striking out six and walking zero.

The Bearcats hit two home runs throughout the game.

Overall, the Bearcats had 11 hits throughout the game.

Burch and Beachem each racked up multiple hits in the game.

After the runaway victory, the Bearcats returned to Bainbridge, where they took on Worth County, eventually winning 12-2.

The Bearcats started off strong when Burch singled on the first at bat during the first inning.

Bo Smith then singled, allowing Burch to reach 3rd base on an error by Worth’s 3rd baseman.

Priest then stepped up to the box, singling and scoring both Burch and Smith, giving them a 2-0 lead.

The Bearcats upped their lead in the bottom of the second.

Koby Wynn was hit by a pitch, before Smith doubled, scoring Wynn.

Beachem then singled, allowing Smith to score on an error by Worth County’s shortstop.

Worth County got on the board in the top of the fourth inning, after Worth County’s McDonald’s RBI Double.

The Bearcats responded with two runs of their own in the bottom of the fourth.

Beachem then singled, allowing both Smith and Burch to score on an error by Worth County’s left fielder.

In the bottom of the fifth, the Bearcats added another three runs to the scoreboard.

Bolton Yarbrough was hit by the pitcher before Wynn singled.

Smith then tripled, scoring both Yarbrough and Wynn, bringing the score to 8-1.

Beachem closed out the inning when he singled and scored Smith.

Worth got their final run of the game in the top of the sixth, when McDonald once again hit a fly ball.

The Bearcats finished the game with three final runs.

Priest singled on fly ball in the first at bat of the final inning. Chris Cooper then singled as well.

William McCorkle then stepped up to the batter’s box, singling.

Wynn was walked, but an error by Worth County’s center fielder, allowed Priest to score.

With the bases loaded, Burch singled, scoring Cooper’s courtesy runner. McCorkle was able to score on the same play due to an error by the same Worth County center fielder, closing out the game.

The Bearcats will now play at home this Friday against Port St. Joe once again. This will be a special military recognition game. All military veterans are invited to attend the game for free and they will be recognized prior to the start of the game.