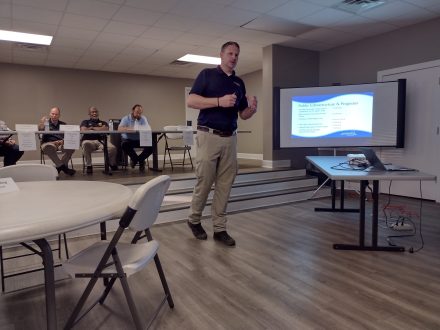 Steve O’Neil explained the Community Work Program and other various projects during the Town Hall meeting.

O’Neil discussed the Community Work Program, and the various projects currently underway and coming in the future. Among the developments discussed was researching Housing and Urban Development (HUD) and Department of Community Affairs (DCA) grants for neighborhood stabilization, with the funding the city sought having not been renewed.

“It had not been renewed for more rounds of funding, so we were kind of late to the party… although early indications indicated it would be renewed,” O’Neil said. Marketing tourism for economic development, identification of new industrial park land, and the designation of a new urban redevelopment area in northeast Bainbridge were also mentioned.

Other projects that O’Neil discussed included expansion of the Boat Basin; more development on North Broad Street and the West St. gateway entrance; looking into an entire corridor study for Shotwell St., which, according to O’Neil, “We don’t really feel it looks as good as it could look.”; the installation of a disc golf course and mountain bike course; extend and pave walking paths to connect the various paths at the Boat Basin; preparation of a storm water master plan; having more frequent inspection of storm drains, as some have been found to have been full of sand, pine needles and trash; and examining the city’s utilities as part of a utilities master plan. These were only some of the evening’s topics.

After O’Neil’s presentation, members of the public were allowed to ask questions and air their concerns. Issues were raised about controlled burns and code enforcement when it comes to overgrowth on properties. Other citizens requested construction of parks and sidewalks in other areas, such as Burgess St. and Spring Creek Rd., with some citizens expressing the view that a disproportionate amount of money keeps going to the Boat Basin.

“It just bothers me that everything, and you may not have anything to do with that, as you just stated… you keep expanding and expanding, and some of that money needs to come into… areas that would benefit our children,” one citizen said.

Issues with city sewage not being connected to East and north Gate subdivisions were also raised, while other citizens raised concerns over D.R. Horton, the company responsible for constructing the new subdivision off Tallahassee Hwy., having heard stories that the company had been unreliable on previous projects. These are just a few of the concerns that were raised during the public forum.

After this question and answer session, Kim Mitchell of Mosaic Consulting discussed the Bainbridge Revitalization Plan. Mosaic is conducting studies on housing and demographics, with members of the public airing their concerns and grievances with housing after the presentation. Some concerns included apartments that were supposed to be handicap-accessible being seen as unsatisfactory.

For more information on these projects and any other concerns, call City Hall or visit the city’s website for ways to contact your city officials.