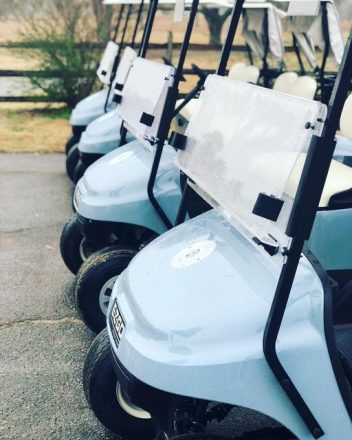 The Bainbridge Country Club has slowly been making improvements throughout the year, with their most noticeable improvement happening on Wednesday, when they received their 40 new golf carts.

Angie Carnahan, Administrative Services Director, said this replacement had been in the works for quite some time.

“We ordered them last summer,” she said.

In addition to the carts being brand new, they also increased the fleet size from 32 to 40, due to the growth happening at BCC.

Membership Director, Beverly Shirley said her goal for 2021 was to add 300 members to the club’s current membership.

“As of December 31st, we have 300 and are growing,” Shirley happily reported.

Shirley said the 300 new members are a variety of the membership types.

However, there are events that drive membership, such as the upcoming twilight golf.

Twilight Golf will kick off on March 17 with a St. Patrick’s Day Celebration and is really popular amongst the younger crowd.

With the growing membership, Shirley has had to make additional investments in the club to help maintain the membership, but said most have been in the process for the past six months.

One of the things twilight golfers and other golf aficionados can look forward to is meeting the new golf professional, Kenny Szuch.

“We’ve also hired a new golf course superintendent (Richard Irvin), who has made huge strides on the golf course,” Shirley said. “He’s great and it’s going to be fun to see, when the grass turns green, the fruits of his labor.”

In addition to the changes on the course, Shirley said the Club House has made some aesthetic changes, such as all new chairs in the Oak Room.

“When you see change, it makes people feel better about their membership, because it adds value,” she said.

With all the psychical changes happening at the BCC, Shirley said members can also expect to see their new website launching in the next week.

She invites everyone to come out and see the changes for themselves and consider becoming one of their members today.