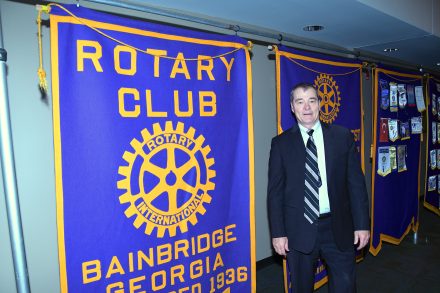 Commissioner Tim Echols spoke to the Rotary Club on Tuesday, discussing the origins of the Georgia Public Service Commission and issues pertaining to solar energy, as well as plans with Plant Vogtle.

The Bainbridge Rotary Club met for their weekly meeting at the Kirbo Center this Tuesday. The guest speaker for the day was Commissioner Tim G. Echols with the Georgia Public Service Commission.

Echols initially began by recounting how he met Truett Cathy at 17, founder of Chick-fil-A.

“I was the Rotary Club Student of the Year. I know Rotaries are moving toward the national sponsorship, but I remind them of how important it is for us to raise good home-grown leaders,” Echols said.

He recounted how Cathy invited him to his office after that Rotary meeting and encouraged him to go to college and work on his leadership skills, and promised him a Chick-fil-A store after college.

Echols then went on to discuss the origins and role of the Public Service Commission.

“Before the PSC got involved in 1879, train companies pretty much charged whatever they wanted,” Echols said. “That got out of hand, and what happens when things get out of hand?… You start complaining to legislators, and what do you wind up getting in Atlanta, or back then, Milledgeville? You get bills, you get laws, you get regulated.”

He focused specifically on the Public Service Commission’s relationship with electricity and energy. One point brought up included dispatchable energy, and issues with solar energy.

“This dispatchable power going away concerns me, because it puts the grid in jeopardy,” Echols said. “Not every day, but in San Francisco, if it’s been raining for five days, and the solar panels haven’t been working, and the batteries are empty, you’re going to have some rolling brown-outs. In August. It won’t happen in February, but it’ll happen in August, when it’s hot.”

One of these benefits was solar energy was cheaper, and could lower bills. “Unfortunately, we have put a bunch down here, and until we improve the transmission grid, you’re probably going to see most of the solar that we approve later this year go a little further north. ”

Other topics discussed included Plant Vogtle and the two new reactors being built there, and their importance. “The project that we’re building over in Waynesboro… despite it going over, is a modern construction miracle… it’s the equivalent of a spaceship,” Echols said.

Carbon taxes and the “war on fossil fuels” were also issues addressed by Echols.