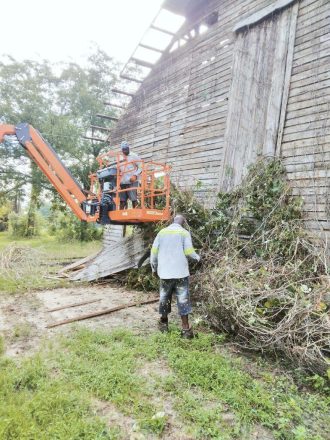 Descendants of Thomas Jefferson, who used to work on the Miller Farm, helped to take the barn down and use the reclaimed wood for various projects throughout the state of Florida.

An amazing project took place in Fowlstown, Georgia. It was a special project where one of the old barns on the Miller Farm was taken down piece by piece, except for some parts that were fragile and came down on their own. This barn had many sentimental values for the owners as well as the former workers and families who worked in the barn over 50 years ago. Some of the families were, the Jeffersons, Millers, Pearsons, Gaines, Wrights, Johnsons, Radfords, Greens, Fosters, Peacocks, Osbornes, Faulks, Bass, Clarks and many more not named. The late Mr. Gene Miller often talked about planning a fish fry to get all of the families together down at the old fish pond in the field. Most of all the elders are now deceased, but their many descendants are still living in different cities, towns, and states.

It was during the summer of the year 2021 when the project took place. The late Thomas “Tom” Jefferson, Sr., the patriarch of the Jefferson family, played an import role in the day-to-day operation of the Miller’s Farm. He was the “Lotman” and his job was to make sure all of the equipment on the farm was working properly, such as the wagons, tractors, farming equipment etc. He also had to feed the cows, horses, mules, donkeys, milk the cows and many more important duties in maintaining the farm. His children can remember how he had to leave the house during various times, sometimes late cold nights to shut off the water tower. One of his most important tasks was lighting the gas heaters in the barns for several hours during each night to help dry out the tobacco and preparing it for wrapping, packing, and sending it out for further processing. He was a hard dedicated and faithful worker. He performed these duties until his health failed him and he passed away on September 16, 1970 at the young age of 46. He and his wife, the late Annie Bea Jefferson, raised their 9 children on that farm with the fear and admonition of God. She passed away at the age of 87 on February 11, 2015. They all were members of Emanuel M. B. Church. Their children were Betty, Leroy (deceased), Thomas, Martha, Malcolm (deceased), Gwendolyn, Sylvia, Patricia and Steve.

Sylvia J. Bivins was contacted by their younger brother Steve, who currently lives in West Palm Beach, Florida, about one of the old barns that was on the farm. He works for Beyel Brothers Crane & Rigging Company, which has several locations throughout the state of Florida. The Beyels were looking for old barns to be able to reclaim the wood to use for different building projects. Steve informed one of the brothers, Daniel P. Beyel, of one of the old barns that was on the farm where his family grew up on. Sylvia got in touch with Rollins Miller, who owns the barn, to discuss the Beyel’s interest in old barn. After they made contact with each other, Daniel and his wife came to Bainbridge to look at the barn and from that point on, they were in business. Steve came from West Palm Beach, Florida with his working crew, also used local workers to take down the old barn. It was a risky undertaking but, they finished the project within 19 days including cleaning the property as though nothing was never there. There were many families that came by and offered their support during this project by bringing food and lunch for all of the workers. They were also amazed to see the organization of the work and the short length of time it took to complete the project. The workers from Florida were very appreciative and amazed of the hospitality shown to them by the community.

While taking the barn down, Steve mentioned the fact that his mind was on his father the entire time and he felt a sense of calmness and security because he felt his father was watching over him and the workers. While dismantling the barn, he discovered the gas piping that ran to the barn that his father used to light the heaters. The siblings can recall going to this same barn with their father to light up the heaters in the barn to dry out the tobacco. Also, they shared fond memories of their mother and other workers in the barn stringing tobacco. There were other workers in the field priming the tobacco, and others loading it to bring to the barn. This process was done until all of the barns on the farm were filled. During those times, the cost of living was not that expensive but everyone’s need seem to be met because the people shared and cared more for each other.

In closing, the old barn is gone, but the precious memories will last forever in the hearts and minds of all the families who were apart of this great work.