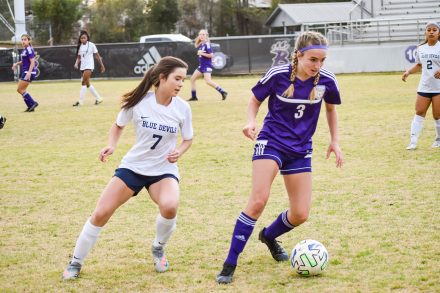 Bainbridge High School Lady Cats went to a record of 2-2 after beating the Tift County Blue Devils 5-1 last Friday night. The leading scorers for the Ladycats were senior Anna Kate Littleton and freshman Addison Hill. The Lady Cats first score came in the twenty-eighth minute of the first half when Midfielder Aubrey Hill sent the ball to fellow Midfielder Addison Hill, where she shot to make the score 1-0. A little more than a minute later the Lady Cats went up 2-0 when Addison Hill scored again after an assist from Wing Anna Kate Littleton. Twenty-two minutes into the second half of the game, Addison Hill caused an On Goal score when her cross hit a Blue Devils leg and bounced back into the goal making the score 3-0. In the twenty-ninth minute of the second half, Nathaly Rodriguez sent the ball to Anna Kate Littleton who took a short kick into the goal. During the thirty-fifth minute, Nicole Tyre took a free kick and booted the ball into the six yard box where it was sent into the goal by Anna Kate Littleton. The Bainbridge defense held the Blue Devils to one goal with some spectacular saves by senior goalkeeper Halle Cannon making the final score 5-1. The Lady Cats will be back in action against Cairo High School Thursday, February, 24th.