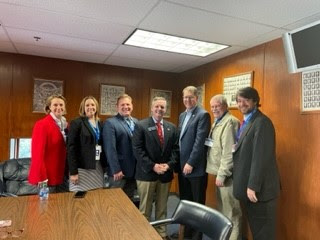 We are approaching the Halfway Point with Thursday’s adjournment signifying the end of our 18th legislative day, we are quickly approaching the halfway point of the 2022 Legislative Session. Last week, a total of fifteen bills and resolutions passed on the Senate Floor, many of which carried bipartisan support.

Early in the week, much of the Senate’s time was dedicat­ed to subcommittee hearings of the Senate Appropriations Committee. These subcommittee hearings allow us to hear, from Georgia’s agencies themselves, what their budgetary needs look like for the remainder of the fiscal year, and how those may differ from what was originally appropriated by the House. This way, we can true up any discrepancies between what we originally budgeted for, versus what funding was necessary. After our hearings, additional meetings were held to iron out the final details of the Senate’s proposed budget, which should be passed out of the full committee and on to the Senate floor in the next week or two.

A major theme of our legislative calendars last week was public safety, as we passed several mea­sures aimed at providing additional financial security for our officers and also imposing harsher penalties on those who carry out the most detestable of crimes. We passed Senate Bill 84 which would add communications officers to those eligible to enter the Peace Officer’s Annuity and Benefit Fund. We also passed Senate Bill 461 that would make it more difficult for someone convicted of human trafficking to post bail by elevating that authority to a superior court.

Additionally, the Senate saw a need to address cyberbullying, a growing issue in our schools. Sen­ate Bill 316, would require parents and students be notified that certain acts of cyberbullying may be considered stalking. This is such an important step to take to thwart the unsettling rise in mental health struggles among our student popula­tion. As a final public safety bill we passed SB 360, known as “Colton’s Law”. It would increase penalties against those who are convicted of cruelty against a disabled minor. All of these bills have the ability to make our state a safer place and one that is more supportive of our law enforcement.

This week, we will convene for only two legislative days, but will have plenty of committee work to keep us occupied all throughout the week. If you have any questions about any of the bills we have discussed to this point, or about the budget, please don’t hesitate to reach out to my office.

You can also stay in touch by visiting our website at http://www.senate.ga.gov/spo/en-US/SenateVideo.aspx to watch a live stream of the Senate in action, as well as archived committee meetings, and review legislation that we are considering.

I am honored to serve Senate District 11. Thank you for allowing me to be your Senator.