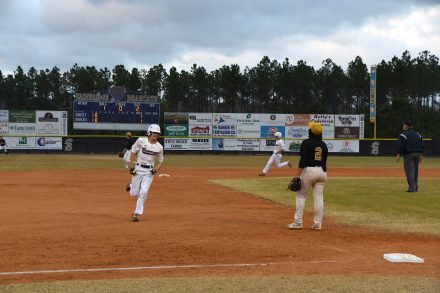 Bolton Yarborough sprints to 3rd base during Thursday’s home game against the Colquitt County Packers.

The Packers started things off on the second play of the first inning, when they scored.

However, the Bearcats were quick to tie things up in their second play of the first inning.

Neither team scored again until the bottom of the third, when the Bearcats drove in two runs.

Josh Beachem singled on the second play of the inning. Chase Parker then stepped up to the plate, singling as well.

With two on base, Cason Priest entered the batter’s box, where he was hit by the pitch, advancing Beacham to 3rd and Parker’s courtesy runner, Koby Wynn to 2nd.

Finally, Bolton Yarborough was up to bat, singling, scoring both Beachem and Wynn.

Holding the Packers to no runs once again in the fourth inning, things were looking good for the Bearcats, especially when they upped the score once more in the bottom of the fourth.

The inning started with back-to-back outs.

The Packers refused to stay down, though and had a huge 5th inning, scoring seven runs, while Parker and Chris Cooper alternated on the mound.

The Packers only advanced their lead in the top of the 6th inning, when they scored two more runs.

The Bearcats were unable to make a comeback from this late lead, allowing two more runs in the top of the seventh inning, leaving the score 12-4.

Head Coach Donnie Coxwell was proud of the effort, saying Parker pitched very well at the beginning of the game, unfortunately the wheels just fell off toward the fifth inning.

The Bearcats had an opportunity to pull out a win on Monday, though, when they faced off against non-region opponent Elba in Dothan.

Elba scored two runs in the first inning, but the Bearcats were quick to come back in the bottom of the first, scoring six runs of their own.

Smith was walked in the first play of the inning. Burch then singled before Beachem hit a sacrifice fly, allowing Smith’s courtesy runner, Wynn to score.

Priest then singled, scoring Burch, evening out the score.

Owen Richard was walked. Drew Clayton was up to bat next, where he singled, scoring Priest.

With the bases loaded, Bricen Palmer hit a fly ball, reaching on error and scoring Richard.

With a 4-2 lead, Kagen Castro then singled, scoring Clayton. Smith found himself up to bat again, singling and scoring Palmer to give the Bearcats a 6-2 lead, headed into the second inning.

The Bearcats upped their lead in the bottom of the second inning, when they scored three more runs thanks to Richard, Priest and Clayton.

Elba found home plate again in the top of the 3rd.

However, it wasn’t enough as the Bearcats brought in another two runs in the bottom of the 3rd, making the score 11-3.

Elba got one final run in the top of the sixth to close out the game 11-4.

Coxwell was proud of the win.

“We came out and hit the ball decent,” he said. “The main thing was we pitched well and threw strikes.”

Coxwell said he saw a major improvement from Thursday’s home game to Monday’s away game.

He hopes to get another win at home next Monday, when the Bearcats face off against Worth County at 6 p.m.