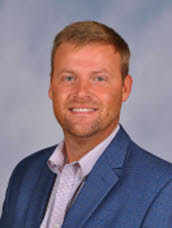 Thursday night the Board of Education named the new Bainbridge High School principal, Christopher Merritt during their regular board meeting.

Merritt hails from Thomasville, where he is currently serving as the Assistant Principal and Title IX Coordinator for Thomasville High School.

He began his journey in education back in 2006, when he became a volunteer coach for his alma mater, Colquitt County High School.

He would eventually leave CCHS in 2008 to accept a position at North Florida Christian School as an Offensive Line coach and Offensive Coordinator position. Upon graduating from Albany State University, he accepted a teaching position as an elementary school physical education teacher before moving to middle school history. During this time, North Florida Christian School won the 2008 A and 2011 AA FHSAA State Championships and four region championships. In 2014, Merritt returned to Georgia, teaching history and accepting the quarterback’s coaching position at Cook County High School. During his two years in Adel, the Hornets won the 1-AAA region title in 2014. In 2016, Merritt took a teaching position and the Offensive Coordinator position at Thomasville High School. After the 2016-2017 school year, Merritt was named the Athletic Director of Thomasville High School. In 2018, Merritt was elevated to Assistant Principal at the school.

During Merritt’s tenure as an Assistant Principal, he has overseen the administration’s operational and instructional side.

Merritt said he was originally attracted to the BHS principal position due to the strong academic, art, CTAE and athletics programs BHS offers.

“They have a strong staff and have been consistent over the years, and I wanted the chance to learn and grow with them,” Merritt said.

Merritt said throughout the interview process, he was shown time and time again that BHS would be the right fit for him.

“I got to meet everyone throughout the selection process and I just kept getting a good feeling about BHS,” he said. “Then, I had my one-on-one with Superintendent Tim Cochran, who is so well-respected throughout the state and it couldn’t have gone better.”

Merritt said he and his wife mulled over the decision, because Merritt refused to go just anywhere. However, during the approval process at the Board of Education meeting, he knew he had made the right decision.

“My wife Susanne and I couldn’t help but notice how positive everyone was toward us,” Merritt said.

Merritt acknowledged change is never easy, and he has no intentions of making changes right away.

“A good leader listens,” he said. “I want to listen to students, staff and the community and see what they want in a high school.”

Along with plans to listen, Merritt said he also wants to be a helping hand.

“We are called to serve,” he said. “My wife is a nurse and I am in education. We want to serve our community in the best way we know how and give our daughter Hazel a place she can be proud to call home.”

Merritt looks forward to joining the staff at BHS.

“I’m humbled and honored to serve the students of Bainbridge,” Merritt concluded.