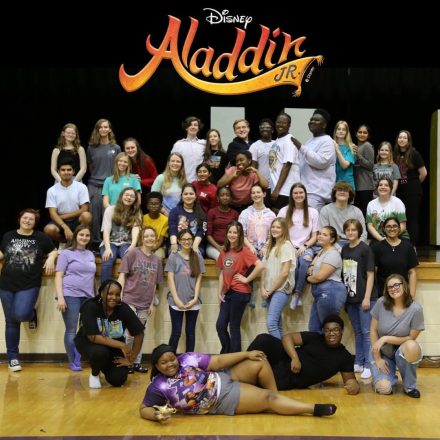 The cast and crew take a break from rehearsal to smile for a picture. The production’s opening night is Thursday at 7 p.m. with additional performances on Friday and Saturday.

Flying carpets, genies and sultans are coming to Bainbridge as the Bainbridge High School Drama team prepares for their performance of Aladdin Jr. this week.

The students have been planning this for several weeks, initially beginning auditions back in November, and resuming after winter break with rehearsals in January.

“We’ve had about, maybe seven weeks total to get this all together,” drama teacher Leigh Powell told the Post-Searchlight.

Props for the play have been recycled from previous productions and given a makeover, while lighting and sound for the production are being provided by Vince Edenfield. The actual show, as a Jr. production, is an abbreviated stage adaptation of Disney’s Aladdin.

“The difference between a Junior show and a regular show means it’s shorter for time purposes,” Powell explained. “Also, this is one of the shows we perform for our younger students, so we like to perform a shorter show so they can enjoy it more, because with longer shows with little kids, they tend to get a little restless.”

“It’s exciting to see so many kids involved with theater, whether on-stage, off-stage, dancing or singing,” Powell said. “Theater is like an all-encompassing art form, and so that’s something I’m glad that the students are enjoying.”