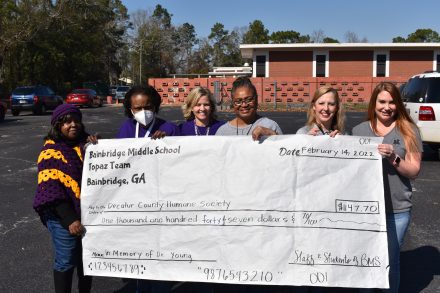 Topaz team teachers present Ashley White with the Humane Society a check for $1,147.70.

Dr. Kristen Young was loved by all of her students and co-workers at Bainbridge Middle School.

When she passed on January 13, 2022, her co-workers felt they must honor her memory in a way that was true to her personality. So, they decided to raise funds for the Decatur County Humane Society- a place that was dear to Dr. Young, as she loved animals.

The BMS Topaz Team spoke on her love for animals and some of the fond memories they have of her saving the helpless.

According to her co-workers, Young had four dogs, but loved to pick up strays as well.

“If she was on the way to work and saw a stray dog, she would stop, pick it up and take it back to her house and post about finding it,” said co-worker Gina Conley. “She was all the time picking up strays.”

Her love of strays even led to her keeping a stray in her co-worker’s classroom for a few hours one day.

“I had a cat one day that ran around my room for a little while, because she (Dr. Young) picked a cat up out here in the parking lot,” said Topaz team member, Donna Barefoot. “She was coming to work and so she just brought it with her and put it in my room.”

Young later went to take the cat home during her planning period, only to find its owner searching for it in the parking lot.

“She just had a passion for animals,” Conley said.

Conley went on to detail a time when the school had a bat they were trying to get rid of before the students tried to touch it.

“I was telling Dr. Young about it and she said she would like to take it to her house,” Conley recounted. “She really loved any kind of critter.”

“One time there was this huge cockroach and I went to get the broom,” she said. “But, she (Dr. Young) grabbed the broom and let it outside.”

Young’s love extended beyond just animals, though. She truly had a heart for children and wanted to help them in any way possible.

“She would see kids, who maybe didn’t have a lot and make sure they got what they needed,” Butler said. “She did a lot of stuff on her own that we never knew about until later.”

This included providing kids with their Christmas wishes and even taking them to the doctor on occasions.

“She didn’t see color and didn’t care where you came from,” Butler said. “If she saw you were in need, she was going to help you.”

Conley said Young was a big advocate for the underdog.

“If she saw a student had a hard life, she wanted to help,” Conley said.

This included sometimes “going to bat” for her students.

Her co-workers detailed a time where the school wanted to hold back an extremely smart student due to attendance issues, but Young fought for the student to get in the PLC, so they could still be on grade level.

Despite all of her good deeds, Young was struggling though internally. She was described as an empathetic person, who often took on the weight of other’s troubles.

Young’s co-workers agreed that teaching has changed drastically since 2020 and it’s a completely different breed of students they are dealing with.

“We are seeing a lot of kids who need mental help, more so than I’ve ever seen” Conley said.

They all agreed Young saw this and really became weighed down by the hurt in her students.

“I went to Mrs. Grubbs in guidance and told her our teachers need help,” Conley said. “We need to be more aware of the needs of teachers emotionally and physically.”

Although it felt like nothing could be done to help the students and teachers properly grieve this loss, they did devise a plan to honor Young’s memory with their fundraiser.

In total, they collected $1,147.70 in monetary donations, along with two palettes full of dog treats, toys and other necessities.

Since the end of the fundraiser, they have added another $20 to their fund.

While no one can replace Young, her co-workers hope this donation and speaking out about teacher’s mental well-being will create a positive change in the world.