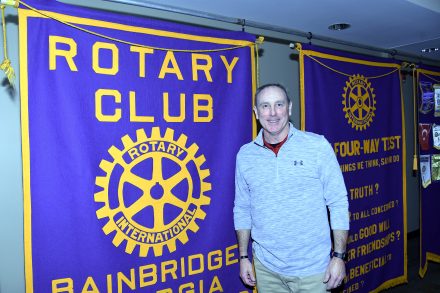 The Bainbridge Rotary Club gathered at the Kirbo Center Tuesday for their weekly meeting. The guest speaker for this week was Kevin Angell, who has worked with the GHSA, GISA and GSC (Gulf South Conference) as a referee, predominantly for football, in addition to umpire for baseball. He began refereeing college football in 2012; in total, Angell has refereed 671 games, ranging from varsity, to non-varsity, to rec games.

One topic discussed at the meeting was the issue of rule changes.

“I get to see the rule changes coming out quickly, prior to the coaches getting to see them,” he said. The Playing Rules Oversight Panel (PROP) committees are responsible for such rule changes, and referees are sometimes afforded the opportunity to be on the committee. So we have the opportunity to go in there, see a rule change, and we get to put our two cents in. Then they call us up and give us our change back.”

Some of the rules that Angell felt needed better enforcement included rules about face paint and uniform pants lengths. Other rules that were discussed included feigning injuries and unsportsmanlike conduct, which included things like distracting video displays on jumbotrons and players taunting.

Angell also discussed various controversial calls he had made, such as a foul for targeting, which other officials had missed and claimed did not occur. He also discussed the usual routine of a referee in the days and hours leading up to a game, including meetings the evening prior, and keeping track of the team’s footballs.

“If you’re sitting at home, and you think you can do this at the house, man, we’d love to have you, because it gets harder and harder to find folks that’ll get on the field and do this,” Angell said in closing.