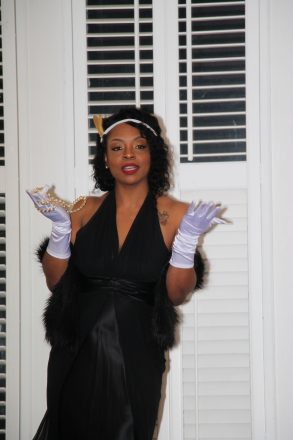 Tabitha Grant lights up the catwalk at the Phoenix Affaire fashion-theater and supper club show held at the Firehouse Arts Center in Bainbridge during Black History Month.

The time has come for all to rise. Not because a judge is entering the courtroom but because the Bainbridge-based Phoenix Affaire Group announces plans for their 20th year anniversary of the Black History Month (BHM) Phoenix Affaire RISE! Weekend events to run from February 21st-27th in the four area cities of Bainbridge, Donalsonville, Colquitt, Attapulgus and newly-added this year is nearby Whigham, Georgia.

The local BHM events are back after being canceled last year this time due to the still ongoing COVID-19 pandemic but Creator and Executive Producer, Rahn d. Fudge of San Francisco who is also a 1979 graduate of Bainbridge High School felt the need to try and move–safely– forward. “It’s no secret much more needs to be done to try and encourage local black residents to consider getting vaccinated. I’d like to use this local Black History Month events platform as a way to do just that while still celebrating our heritage and marking a respectable milestone we’ve reached as a community grassroots group 20 years later”, says Fudge. To that end, he plans to stage a two-day vaccine drive in Bainbridge working with CORE, a mobile unit clinician team linked with the Georgia Department of Public Health.

This year the group also plans to do a slight makeover of the name from Phoenix Affaire RISE! Weekend to simply the RISE! Celebration although everything will still be under the auspices of the Phoenix Affaire Group. Fudge sees this as a positive signal of growth. “When we started doing local Black History Month events 20 years ago it was just a two-day weekend event held in one city (Bainbridge). Today the events have grown to a full week of scheduled activities in four different cities and we are really hoping to bring Whigham along for the ride this year to increase that number to five local cities where Phoenix Affaire BHM events will take place. Needless to say, the celebration is spreading and that’s a good thing”, explains Fudge.

The newly-named RISE! Celebration is set to happen later this month starting on February 21st and running through February 27th. A full schedule of events is being developed with an official announcement expected within the coming week or so and will include a BHM movie night, a wreath-laying ceremony to honor the life and legacy of Attapulgus-born and Civil Rights Movement legend Hosea Williams, a black gospel music event inside Willis Park and the celebration’s signature event, the Phoenix Affaire BHM fashion-theatre and supper club show. In fact, the fashion show is seeking local, fully vaccinated community volunteer models for an audition this coming Saturday, February 12th. If interested, and for more general information, please call: 1.229.205.0218 or email rahn.fudge@gmail.com. Also, contact the organization @PhoenixAffaireRISE on Facebook.