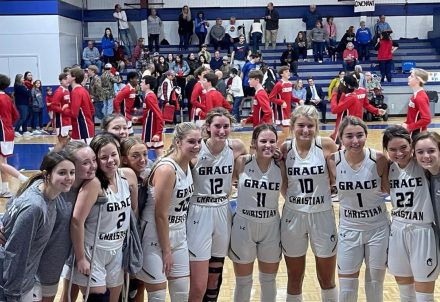 The Lady Cougars basketball team smiles after their win over Covenant Academy during the first round of the Region Tournament last Thursday.

The girls started off slow in the first quarter, only scoring 8 points. Zoe Wells and Lainey McRae led the team, each scoring 4 points.

After half-time, the girls came out stronger and had their best quarter of the night, scoring 14 points in the third.

“Thursday night we played a tough game,” Coach Lance Godwin told the Post-Searchlight. “It was back and forth all night. We were able to get a turnover and make some free throws at the end of the game to win it.”

The Lady Cougars then went up against Central Fellowship Christian Academy on Friday in the region championship, ultimately losing 38-72, although this still put them second in the Region 4 AAA tourney.

“Friday night we ran out of gas and lost the region championship,” Godwin said. “I’m very proud of our girls and how we fought during the region tournament to be able to play for the region championship. We all wanted to win, but finishing 2nd in a big region is an accomplishment. We are a small school that got bumped up to triple-A, so it shows that we have a great team to go and compete and finish second in a very hard region.”

The Lady Cougars went on to host the first round of the state tourney against Lafayette Christian Tuesday night.