Lady Cats Varsity Soccer opens up season with a win 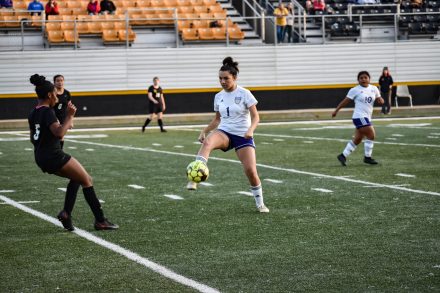 Nicole Tyre takes possession of the ball during the Lady Cats season opener at Bazemore-Hyder Stadium.

The Bainbridge High School Varsity Girls defeated the Valdosta Wildcats 9-0 at Bazemore-Hyder Stadium in the first match of the year. The Lady Cats scored quickly in only the 2nd minute of the contest by Midfielder Addison Hill.

Bainbridge went up 2-0 when Forward Nathaly Rodriguez scored in the 23rd minute with a soft touch of the ball over the goalkeeper’s head.

Forward Kay Lee Lopez helped create an On Goal by Valdosta by applying pressure to Valdosta’s Center Back and causing a bad pass into their own goal which increased the lead to 3-0. Kay Lee then scored on her own by coming down with a goal kick from Valdosta and then shooting from just inside the 18 yard box to extend the lead 4-0.

A few minutes later, Midfielder Evelyn Mach got into the scoring action from the top of the 18 yard box when she received a pass from Aubrey Hill. Bainbridge now had a comfortable 5-0 lead with less than 13 minutes before half.

The Lady Cats next score occurred when Brennyn Timmons bodied a corner kick into the goal from Evelyn Mach and extended the lead to 6-0.

The final score before halftime came from Forward Nathaly Rodriguez who received a pass from Aubrey Hill, her second assist of the game.

In the 13th minute of the second half, Evelyn Mach scored her second goal of the game after receiving a nice pass from Nathaly Rodriguez.

The final goal of the game was from Carmen Martin from just inside the 6 yard box and giving Bainbridge a convincing 9-0 victory.