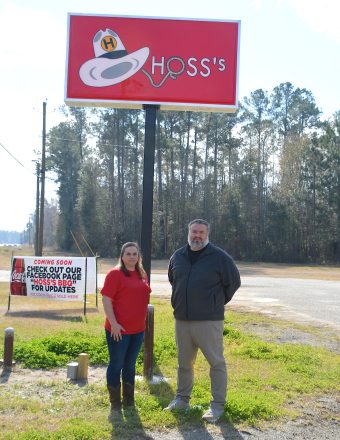 Adam and Whitney Mitchell wanted to bring their native North Carolina-style BBQ to Bainbridge with Hoss’s.

Another new restaurant is coming to town. Located on Tallahassee Highway, next to the Glen Oaks Motel, where Hall’s Seafood used to be, Hoss’s BBQ will be offering Carolina vinegar-style barbeque starting this Wednesday.

Owners Whitney and Adam Mitchell are originally from North Carolina. The couple moved to the area in 2009 for Adam’s manufacturing job, and noticed that the barbeque offered here was different.

“I don’t know if you’ve ever had a vinegar-based barbeque,” Whitney said, “It’s just different from what you can get around here, and anytime we go back home, that’s one of the first stops we’re gonna make, is getting some North Carolina-style barbeque.” She described the restaurant as, “bringing some of our hometown down here.”

The couple has owned the building since 2020, and has been working on cleaning and remodeling it intermittently during that time.

“I just took my time doing it, because of COVID and the problems you hear about people not wanting to work,” Adam said. Despite staffing shortages that have plagued most industries as of late, Hoss’s hasn’t seemed to suffer from it.

“That was one of the things I was worried about, that we’d be ready to open but wouldn’t have staff, but we’ve had a really good turnout,” Whitney said.

When open, Hoss’s will offer everything from pulled pork, to ribs, brisket and ¼ and ½ chicken, as well as steak on Friday and Saturday nights.

Adam was cautious about their grand opening, saying, “It really depends. I think by Friday, we’ll have a good crowd. Tomorrow? Maybe, I don’t know… I mean we’re right out of town, not far enough to deter me from going to eat somewhere. But people not knowing what kind of barbeque it is, or how it tastes, they might be a little hesitant.” He continued, “I think once people taste the food, and with word of mouth, I think people will gravitate more out here.”