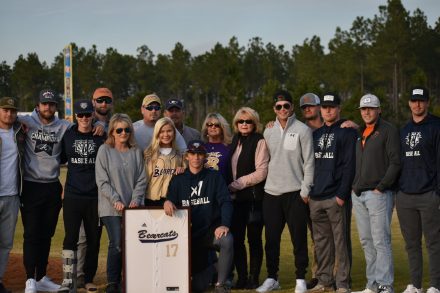 Dalton Harrell’s family, along with his longtime girlfriend and close friends honored him with the opening pitch on Monday in the Bearcats’ home opener against the Thomasville Bulldogs.

The Bearcats baseball team held their home opener on Monday, February 14 against the Thomasville Bulldogs.

In an emotional beginning, the first pitch was thrown by former Bearcat, Colton Harrell.

Harrell threw the first pitch in honor of his late brother, Dalton Harrell, who tragically passed away this past December.

His family was also honored and given Dalton’s former jersey number 17 in a frame.

Following this display of remembrance, the Bearcats set out to get a win for Dalton. However, they eventually came up short 20-6.

Senior Cason Priest started off on the mound, surrendering five runs to Thomasville in the first two innings.

Bo Smith then took the mound in the top of the third inning, where the Bulldogs were able to score two more runs, leaving the Bearcats trailing 7-0.

The Bulldogs only continued to pick up steam in the top of the fourth, when they upped the score to 11-0.

A bright spot for the Bearcats finally came in the bottom of the fourth, when they were able to score two runs.

The inning started with Ryles Burch being walked. Following a strikeout by Josh Beacham, Chase Parker was then hit by a pitch, giving the Bearcats two free bases.

With their first chance to score, Priest stepped up to the batter’s box, singling, scoring Burch.

Senior William McCorkle was up next, where he reached on a dropped third strike, scoring Parker’s courtesy runner, Griffin Perkins.

Following the two runs, Thomasville turned up the heat, scoring three more runs in the top of the fifth inning, while Koby Wynn was pitching.

The Bearcats attempted to make a comeback in the bottom of the fifth, scoring three runs as well.

The inning began with two outs. However, Burch was hit by a pitch, allowing the Bearcats to gain a base.

Beacham then stepped up to the plate, singling and advancing Burch to 3rd base. Thomasville’s 3rd baseman then made an error, allowing Burch to score.

Parker was next at the plate, singling and scoring Beacham.

Priest was next at the bat, where he reached on a dropped third strike, allowing Parker’s courtesy runner, Perkins to advance.

Chris Cooper then hit a line drive and was able to reach on a Bulldog error.

With the score 5-14, the Bulldogs sealed the win in the top of the sixth, scoring six additional runs.

The Bearcats made their final score of the night in the top of the sixth, when Parker singled, scoring Smith.

The Bearcats will now take on the Colquitt County Packers on Thursday at home at 5:30 p.m.