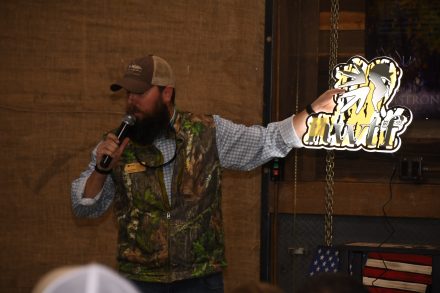 The NWTF raised funds for their club and the national NWTF through a live auction and a silent auction.

Members of the local National Wild Turkey Federation chapter gathered at Klay Armstrong’s plantation Thursday evening for their usual fundraising banquet. Attendees were treated to a dinner of grilled chicken, green beans and cheese potatoes, catered by TK’s Bar and Grill, with a concurrent silent auction, followed by a traditional auction and raffle drawing. Items up for auction included guns and other outdoor supplies and accessories, most purchased from Flint River Outfitters, while more luxury items up for bid included the winner’s choice of hunting trips to places like Argentina, Uruguay, or South Africa.

According to local chapter president Ben Clenney, around 80 people attended the banquet, which is expected to have raised $40,000, prior to expenses, and roughly $24-25,000 after expenses. Most of the funds raised will go back to the national NWTF organization, while a small portion will be used by the local chapter to fund upcoming events, such as Beards for Benefits. Depending on how much money is raised, the chapter may be eligible for the Golden Gobbler Award, which it has won several times before. In an interview last year, Clenney stated that roughly 85 percent of memberships and 75 percent of fundraising come from banquets like these.

“We purchased most of our door prizes from Flint River Outfitters, so that kept the business local,” Clenney said. “We would like to thank all those that volunteered their time, and our sponsors, who helped make this happen.” Sponsors for the event include TK’s Bar and Grill, Pudoo’s Plantation, and Flint River Outfitters.