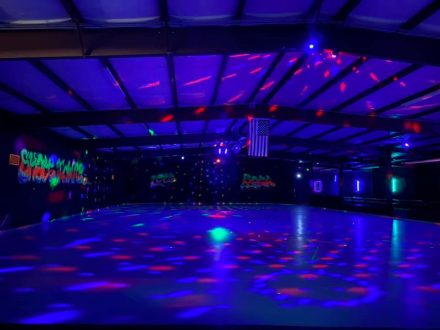 The exterior of SkateTowne has already undergone a paint job, while the interior is undergoing various renovations.

SkateTowne has been a staple in the Bainbridge community since the early 70’s, when the King family owned it. After a sudden fire that shuttered the business for 10-15 years, new owner Bill Meredith renovated the building, making it a skate center every kid hoped to go to in the early 90’s.

However, after years of wear and tear, SkateTowne has once again found itself with a team of new owners, who are ready to take it back to its glory days with new ideas.

Blake and Tabitha Brock, along with Dale and Haley Meadly recently purchased the business from Meredith and have since gone to work, patching up the skating rink and painting it, along with other various projects.

“The big thing we want to do is start having indoor pickle ball tournaments and leagues and have several concerts a year,” Blake said. “I have several people I’m talking to right now to align dates.”
Blake said he would also love to see the return of roller hockey, something he participated in at SkateTowne in his youth.

“We used to compete against Dothan and Tallahassee and had probably 30 kids in our league,” Blake said. “We would love to bring that back.”

Along with the return of old favorites like roller hockey, Blake would also like to see the return of themed skate nights such as, couple’s nights, like the one they are hosting Monday night for Valentine’s Day, along with soul night and youth night for church groups.

The nights promise to be a blast with Brian’s new installation of lights to create a mood for the theme.

The lights will illuminate the new carpeting Brian hopes to install. The old carpeting was ripped in certain areas, but the new carpet will be glow in the dark and create a cosmic look when the black lights turn on.

All of these renovations are in hopes of attracting young kids, who are looking for something to do in a safe environment.

“This is a family run place, and we want to get back to when a parent drops their kid off they know the people in charge aren’t just here for the money,” Blake said. “Every kid I want to treat just like I would treat my kids.”

Blake’s hope is that the kids won’t get bored with just skating, so that is why he has considered the roller hockey, pickle ball and concerts.

They plan to have a few of the smaller ones inside for birthday parties, while they want to clear out the lot adjacent to them to create an inflatable park for kids to play on.

“We want to have pavilions out there, so they can have birthday parties out there as well,” Blake said. “We just want to give them more options.”

While the inflatables park is not yet open, the skating rink is open for rental and birthday parties and regular skating.

Blake hopes everyone will join them in this new venture and looks forward to breaking ground on the new inflatables section in late spring.