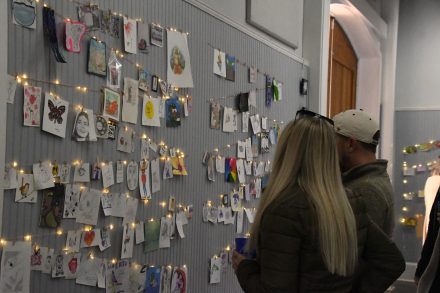 Passersby stopped to view the sketchbook renderings and listen to music during Saturday’s event.

As people gathered downtown Saturday for the Bainbridge Jazz and Blues Festival, some walked over to the Firehouse Arts Center, where not only could they continue to listen to music offered there, but could also view and purchase local art from the Center’s Sketchbook Pin-Up event.

According to Administrative Director Leigh Parsons, over 64 artists, hailing from Tallahassee to Thomasville and even Chattanooga, submitted artwork to the event, while some art was donated anonymously.

“We had a shocking amount of out-of-towners,” she said.

While the event was described as for sketchbook art, various other mediums were accepted, including acrylics and photo collages. Artists had the option to sell their art as well, for any price between $1 and $20, with all the proceeds set to go to the artists.

“This was the most traffic I’ve seen at a show here in a really long time, especially for an art show,” Parsons said. This is the second year the Arts Center has hosted Sketchbook Pin-Up, and was the first time they partnered with the Jazz and Blues Festival. “Last year we just hired our entertainment, but we did offer stages this year.”

Parsons was satisfied with the event, saying, “I think the show was a huge success.” She also expressed a desire to continue hosting them: “Everyone that came had a good time. It was such a unique event, and I’m just looking forward to having another one.”

The next big event the Firehouse will be hosting is this year’s Father-Daughter Dance, this Sunday, from 4:00 PM to 6:00 PM. For more information, contact the Firehouse Arts Center at 229-243-1010.