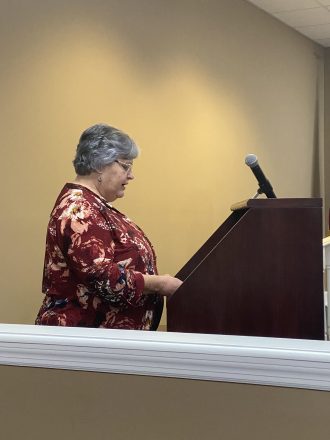 Debbie Elkins shared her concerns about the City of Bainbridge waste management contract on Tuesday.

Residents of Decatur County attended the Decatur County Board of Commissioners meeting Tuesday morning to share their disappointment with the change in waste services.

As readers may recall, the County recently entered into an agreement with the City of Bainbridge for waste management services. The previous provider, Seminole Sanitation was then asked to cease all collection in unincorporated areas as of Friday, April 1, 2022, much to the dismay of some of their customers.

Elkins spoke first in regard to the change.

“The contract with the City of Bainbridge, I do not feel like is a good choice,” Elkins said.

Elkins went on to say that between Hurricane Michael and the COVID-19 pandemic, everyone has struggled, but she knows the issues with Seminole Sanitation can be addressed in a better way.

“An exclusive contract creates a monopoly and deprives us from our right of choice,” Elkins told the Commissioners. “It also prevents anyone in our county from being able to start a new service.”

Elkins detailed her account with Seminole Sanitation, stating she had always received courteous service from them. She did note they had suffered some issues during the pandemic, but said they maintained the business as well as possible.

“During the time they were short staffed and missing parts for vehicles, they kept customers informed and issued credits as needed,” Elkins told the Commissioners.

Elkins stated she had previously used the City of Bainbridge’s waste management services, when she lived in town and they did not offer the same level of care as Seminole Sanitation often did.

She pointed out that the County had three options for waste management: Seminole Sanitation, Taylor Waste and the City of Bainbridge. She questioned why the three companies didn’t have to bid for the exclusive contract, a question that would arise again later by fellow county residents.

He said he previously received a post card from the City of Bainbridge asking if he would like to opt in to their waste collection option, which Wise declined to do.

Only weeks later, he received a letter from Seminole Sanitation stating they were being asked to cease all collection and have to use the City of Bainbridge’s services.

“I don’t like that decision,” Wise said. “I don’t think you (the County Commissioners) should choose who picks up our trash; I think that is an Authoritarian decision. Y’all have now denied me of being able to make my own choice.”

Griffin then spoke on the same issue.

“I’m a retired Sergeant Major in the Army,” Griffin said. “I fought for this country and I fought for the Constitution and to defend it.”

Griffin went on to say that America’s founding fathers sought to establish the principle of sound policy of market freedom, meaning that with some exceptions, everyone must be free to sell anything to anyone at any time or place at any mutually agreeable price.

The capitalist model relies on free market conditions for the creation of wealth- the production of goods and series is based on supply and demand in the general market, otherwise known as the freedom of choice.

However, in a socialist economic model, the production of goods and services is either partially or fully regulated by the government and is referred to as central planning.

“To me, this vote appears to be moving Decatur County toward a socialistic economic system,” Griffin claimed. “I can tell you now that I refuse to use the City of Bainbridge Waste Collection. I will make other arrangements.”

Griffin was met with a round of applause from the remaining few to speak.

Griffin asked the Commissioners to reconsider and get back to the free enterprise system.

“In the beginning it was a simple business,” she said. “It has since grown to three offices with thousands of people depending on us for garbage pickup.”

Clark then became emotional, explaining their founder, along with her father passed away while working at Seminole Sanitation, leaving her and her mother to take on the job.

“I’ll be the first to admit there have been bumps along the road, but the women and men who work at our office have known us for three decades and for them it’s not about the money and politics, it’s about the relationships we’ve built with the people of Decatur County for the past 27 years,” Clark said.

Clark explained she has no issue with competition and would have been open to bidding for the job, but to close a family-owned and locally-operated business was unfair and unjust.

“I believe our family has a right to conduct business here as we have always done,” she said. “All I’m asking is that you reconsider forcing us out of Decatur County and give the citizens the option to choose who they want to go with.”

Chairman Pete Stephens thanked everyone for sharing their thoughts and concerns. However, he said he did wish the citizens had come forward prior to the agreement being made.

While he said he can only speak for himself, he said he still feels the right decision was made in moving forward with the City’s waste management offerings.

The City will begin their service following the April 2022 cease date of both waste management services.