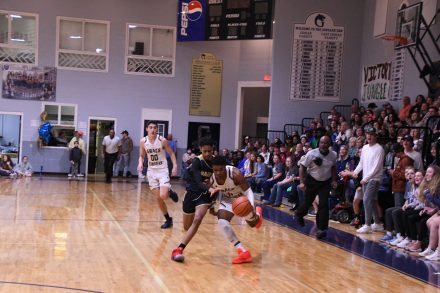 Jafus Ferguson dribbles the ball down the court, keeping it close, as a Byne Saint tries to steal the ball.

Both teams started off strong, with the Cougars scoring 17 points in the first quarter, while the Saints scored 15.

The Cougars were led by Corin McKay, who scored nine points through various shots. McKay was followed up by senior Carter Hathcoat, who made the first 3-pointer of the night, along with other shots, scoring 5 points. Kevin Brooks added an additional 2 points to the total, while Jafus Ferguson made a free throw to end the quarter.

The Bearcats and Saints both gave it their all in the second quarter, tying the game up before heading into halftime.

Hathcoat led the team with six points, two of which were free throw shots.

Despite these fouls, the Saints stayed strong, scoring 12 points, tying the teams up 27-27.

Coming out of the half, both teams put their best foot forward.

The Cougars fell short in the 3rd quarter, scoring 12 points, while the Saints pulled ahead with 17 points.

McKay and Keith Eidson both scored 4 points, while Ferguson and Hathcoat added two points each to the total.

The Cougars knew it would be a battle in the fourth quarter and put up a strong defense, holding the Saints to only eight points, while they scored 15.

Ferguson was on fire, scoring 11 points, while McKay and Hathcoat each contributed two points.

With the score once again tied, the game went into overtime, where the Cougars came out victorious, scoring 14 more points, while the Saints were held to only six points.

Hathcoat and McKay both led in overtime, each netting four points, while Brooks nailed a 3-pointer. Ben Faircloth brought the team another two points, before Ferguson made a free throw to close out the night’s game.

Head Coach Lance Godwin was thrilled with the win, but tipped his hat to Byne.

“They always have a good program,” he said. “They beat us the first half of the year, but then we got to come back and beat them in overtime.”

The Cougars will now turn their attention to the region playoffs, where they are hoping to bring home a region championship and qualify for state.

Lady Cougars get big win over Byne on Senior…