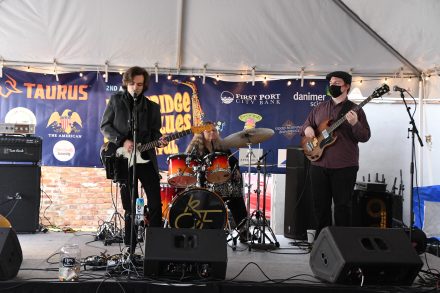 Ben Flournoy, who is only 16, performed with his trio during Saturday’s festival at the Hook and Ladder.

The Bainbridge Jazz and Blues Festival took place over the weekend, drawing thousands from around the area.

Co-founders of the festival, Tyler Thomas and Gallagher Dempsey both thought the weekend was a big success.

“I think it would’ve been even bigger if the weather wasn’t so cold,” Dempsey added.

However, their hope is that the people who did attend will tell their friends that in the event of cold weather next year, heaters and tents are provided for comfort.

“It was a little chilly in the morning with the breeze, but later in the afternoon it warmed up and things really became packed,” Thomas said.

As far as the attendance, Thomas believes at their peak, they had approximately 2,000 people in attendance.

Dempsey and Thomas believes this also drew in crowds to local businesses.

“People were walking around with bags of stuff,” Dempsey said. “It was great to see all the shops being supported.”

Due to the increase in retail, Thomas would love to see the downtown stores become more involved in next year’s festival, encouraging them to possibly partake by putting tables outside their stores, showcasing their products.

With the help of local shops, the duo believes the festival could only grow larger. The first year drew a crowd of nearly 1,400, and now with over 2,000 crowding in for concerts, the festival could double in size in only a 3-year timespan.

“It may have looked like less this year, because it was so spread out, but we really did well,” Dempsey said proudly.

Thomas is already looking forward to next year, stating there will be new businesses opening and more activity on Water Street, so it can only go up from here.

“I fully expect it to grow,” Thomas said.

Even with growth, Thomas and Dempsey would love to see some fan favorites from this year’s festival return.

“Johntavious Willis really had the crowd going,” Thomas said. “He was a character, he was enthusiastic and a lot of fun.”

Thomas divulged that Willis later dined at his restaurant that evening and shared that he would love to return and had enjoyed his experience thus far.

“He tours all over the world; he’s supposed to be in Paris next week, so that is exciting,” Dempsey said.

As far as next year, Dempsey and Thomas said people can go ahead and mark their calendars for the first weekend in February, because they plan to host again, and begin scouring for new artists to bring in this summer.