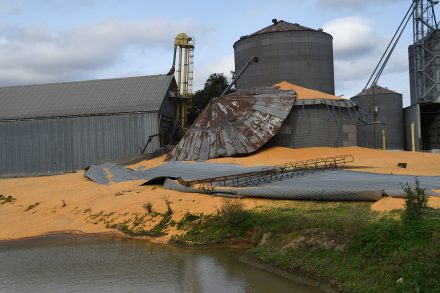 Due to unknown reasons, one of DFP Ag Services’ grain silos collapsed on Thursday, spilling enough corn to drag down nearby power lines.

Emergency vehicles raced to West Bainbridge on Thursday afternoon in response to a call from DFP Ag Services (formerly Dollar Farm Products). One of the facility’s silos had partially collapsed, spilling countless bushels of corn, some of which dragged down nearby power lines. Police and fire set up a perimeter around the affected area due to the potential for fire, while Georgia Power was contacted to shut off the power.

According to Special Projects Manager Tommy Dollar, no staff were nearby when the silo collapsed. While nobody was injured, nobody was also present to witness exactly what caused the collapse.

“I don’t want to speculate,” Dollar said. “I don’t know, may not ever know.” Dollar stated that the grain bin was older, built in the 1980s.

The corn and bins were fully insured, with clean-up expected to take roughly a week. Additionally, Georgia Power cutting off power to the downed lines has cut off power to the other surrounding silos and facilities.

“We’ve got to get power back up so we can unload that peanut warehouse that’s right beside it,” he said. “We’ve got other tanks, they cut power to these other tanks, and we’ve got people that need corn. So that’s what we’re going to concentrate on, getting electricity back up and going so we can resume business as normal.”

“It’s a nuisance more than an aggravation,” Dollar stated. “I’m proud of the way my crew handled it,” he continued. “I was in Colquitt, and was at the Ford dealership I own up there, and they called me. By the time I got here, they’d already notified Public Safety and Georgia Power. They handled it superbly, efficiently and with great honor. They did a good job yesterday before I got here.”