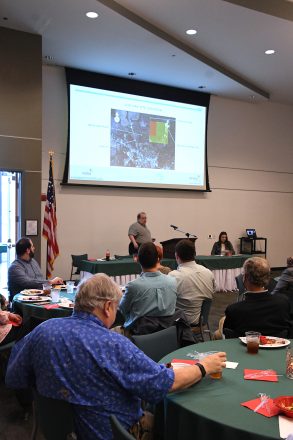 Danimer’s professional engineer and project manager Sheldon Waters detailed the years ahead for the construction of their new facility.

Members of the Chamber of Commerce gathered at the Kirbo Center Thursday for the monthly Chamber Connect luncheon. The guest speaker of the day was Sheldon Waters, professional engineer and capital project manager with Danimer Scientific, who briefly spoke about the construction of the new facility.

“I will say that if you’ve seen it so far, you ain’t seen nothing yet,” Waters said. According to Waters, the facility is projected to cost roughly $500 million, and is expected to employ 400-500 people during construction, and 200-300 during operation. He showed attendees building plans, as well as photos of building progress on the foundations, and discussed the infrastructure that is being put in for the facility.

“What you can’t see is, for example, Georgia Power is going to put a substation in here… I was talking with someone today about the fact that, this area, we actually had to bring infrastructure in, so you’ll see folks bringing in water lines, folks bringing in communications lines and everything like that.”

“I had one of our original shareholders come by the other day and look at the site,” he continued, “and he said, ‘One word for everything you’re doing now is: enormous.’”

According to the current projected schedule Waters presented, the first fermenter is expected to come online in April of 2023, and the last in 2024. When production is at full capacity, the facility is expected to put out 60 million pounds of product a year, more than the Danimer facility in Winchester, Kentucky.

Waters also emphasized the business this would bring to Bainbridge in those years. “For those of you in the area, that does present you with some opportunities, because like I said, we’re gonna have 400 people that are coming in. So they’re gonna need places to stay, places to eat they’re gonna need places for daily living activities, and that’s where you can take advantage of that.”

When asked about plans to build future plants, Waters said, “When I was first hired on to this company, one of the things that really impressed me about them, was that, when I talked to people in Winchester, I heard the words, ‘We’re gonna change the world’ three times before I got through. I understand where they’re coming from now, and we want to help. So we will be building more just for that reason. If nothing else, we want to help the world.”