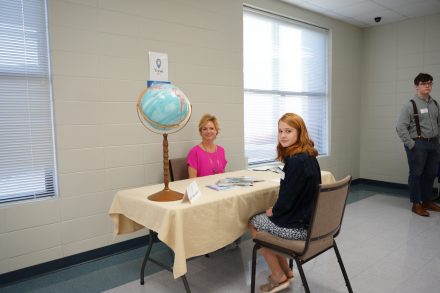 Tish Palmer mans station number three, as she sits with a student, who helps her plan a vacation during the Amazing Shake.

The Amazing Shake is a fast-paced series of creative and unique scenarios to challenge the students involved in the Youth Leadership Program. It transforms their experience into a giant obstacle course, where each station is a creative challenge that engages students in the use of communication and soft skills.

The station places one professional from the local community as the judge. The students go through each station one at a time, spending one-minute interacting with the professional. During that time, the professional judges the student on qualities such as handshake firmness, eye contact, confidence and common sense on a sliding scale of 1-10.

Professionals use a rubric to score each student based on their interaction after the 60 seconds is up. At the conclusion of all the rounds, the overall score for each student will be calculated and the student with the highest overall points earned will be named the Amazing Shake winner at the graduation ceremony on Sunday evening. In the event of a tie, there will be a tie breaker round held.

At each station, professionals assumed the role of the expert and used their professional knowledge and experience to interact with the student.

Examples of stations include the Farm Credit station with Keri Reynolds, where students assumed the role of an employee in the company who wanted a raise.

Reynolds was instructed to ask each student “Can you give me a reason why you think you deserve to be paid more by our company.”

In this scenario, students had to think on their feet of what their skillset was and why their skillset deserved to be compensated more than other students’ skillsets.

Assistant Superintendent Jennifer Wilkinson was in charge of the disgruntled parent scenario, which most students agreed was the hardest.

Wilkinson was tasked with playing the role of an upset parent about the current vaping policy and students had to assume the role of Superintendent and respond to the parent’s concerns and frustrations accordingly.

A scenario that students seemed to like was one put on by Beverly Shirley titled the toast.

Students had to enter and sit at a table, before initiating a toast in honor of their friend on their birthday.

Shirley said the students had great eye contact and seemed to really love their friends, speaking from the heart when tasked with giving a toast.

Other students enjoyed the Final Arrangements scenario, where they were asked to meet with someone who has just lost a loved one. The students were then judged on how they interacted with individuals who are grieving.

Overall, students told directors they learned a lot and the various scenarios did open potential career ideas they never knew they might be interested in.

Once the discussion panel was completed, Dr. April Aldridge and Chamber President Lauren Minor awarded the first and second place winners, before naming a champion.

Minor thanked all volunteers for their time in helping the youth leadership group before the competition ended with a group picture.