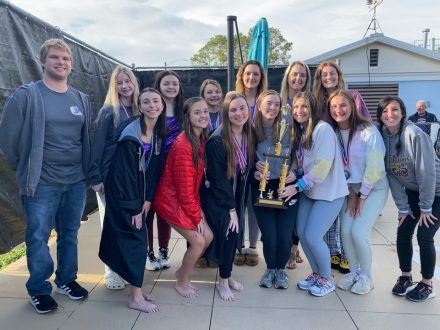 The SwimCats took to the pool at the Area Tallahassee Aquatic Club on Wednesday afternoon for the Region Championship. The Lady SwimCats came out victorious, taking home the region title, while the SwimCats placed 2nd.

Ramsey Mathews, Maloree Inlow, Paige Overman and Allee Grace Dickson made up the 2nd place team, who had an overall time of 2:24.92 and received 12 points for their total.

Jaycee Maxwell, Kaitlyn Bennett, Reese Godby and Ava Bennett comprised the 3rd place team, who had an overall time of 2:54.95. Their team gained 10 points for the Lady SwimCats’ total.

The team then moved onto the Girls 200 Yard Freestyle, where the girls placed 2nd and 3rd again.

In the Girls 100 Yard Butterfly, Dickson and Godby placed 2nd and 3rd.

Ali Bennett took first with a time of 1:20.13, gaining eight points, while

The girls continued on their winning streak, taking 1st and 2nd place in the Girls 500 Yard Freestyle.

Mathews brought the power in the Girls 100 Yard Backstroke, placing 1st with a time of 1:23.69, receiving 8 points.

It all came down to the final event the Girls 400 Yard Freestyle Relay, where BHS placed 1st with a time of 4:28.91, giving them 16 additional points.

The SwimCats struggled to catch up to region rival, TCC, placing them 2nd.

Perkins kept on his winning streak, finishing 2nd out of 8 in the Boys 50 Yard Freestyle, with a time of 25.98, receiving six points.

The team returned to the pool for the Boys 200 Yard Freestyle Relay, where BHS placed 3rd.

Cottles, Guzman, Fillingame and Perkins had a time of 2:00.29, giving them an additional 10 points.

Fillingame gained some much-needed points for the team when he placed 2nd in the Boys 100 Yard Breaststroke with a time of 1:22.23, receiving six points.

In total, the SwimCats garnered 54 points.

Head Coach Eric Conner was proud of the season overall.

“We had a great season,” he said. “The girls never lost a region meet, lasting all the way into this final meet.”

Conner admitted they had to switch up some things during the season due to COVID-19, but every swimmer was very team-oriented and willing to do any race.

The team is graduating four seniors, three of which have swam since their freshman year.

Overman, Inlow and Perkins are all four-year starters, while Laura Kate Mott just joined the team this year.

“They’re going to be hard to replace, because they were always willing to do anything for us,” Conner said.

Conner thanked everyone for their hard work this season and looks forward to what the team brings to the pool next year.