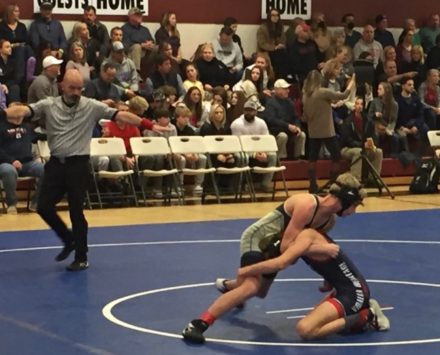 The GCA wrestling team had a good weekend for their inaugural season, with Preston Barnett (pictured above) bringing home a first-place win at the GAPPS state tournament.

This has been year of firsts for Grace Christian Academy, with this being the first year the school has had a wrestling team. During the inaugural year, the GCA wrestling team went to the GAPPS state tournament at Cherokee Christian Academy over the weekend, and were able to place in two of the weight categories. Sophomore Evan Sigman came in fourth in the 170 weight class, while freshman Preston Barnett came in first in the 130 weight class.

Team coach (and Evan’s father) Michael Sigman spoke with the Post-Searchlight about how the team got its start. Originally, Evan attended Bainbridge Middle School, where he competed on the wrestling team. He moved to Grace in the 9th grade, and had wanted to continue wrestling, and after a year delay due to COVID, Sigman decided to start up the team for his son, unaware at the time that he would end up the coach.

“There were a lot of challenges,” he told the Post-Searchlight. “Coaching wasn’t something I was looking forward to doing… but I thought the sport was good development for the boys, teach them character… and by the end of the season I had a lot of fun.”

Most of the challenges Sigman faced were administrative, like getting the boys uniforms and a mat. Also, despite GCA typically being under GAPPS, the boys spent the entire season wrestling in Georgia Independent School Association (GISA) matches; the weekend tournament was their first GAPPS tournament.

“This was the first year GAPPS has had wrestling since they discontinued in 2016. Many of the GAPP schools had wrestling programs that continued out of the organization, but I decided to go to GISA tournaments because they were larger, well established, and closer to home,” Sigman said.

Despite changes and challenges, the season started, albeit with only three team members, Evan, Preston and Jaiden Belcher. Josh Fillingame, BHS wrestler and friend of Evan’s, would come to help the team during practice, after finishing his own wrestling practice. Unfortunately, Belcher suffered a respiratory infection that would sideline him for the last three tournaments.

Despite the administrative hassles and challenges of such a small team, Sigman was pleased with the boys this season.

“To start the year out, I told the guys it was gonna be rough, and just to improve from match to match, and they did that. They would go to basketball practice after school, and then they would practice wrestling at night after I would get off work.” He continued, “I was really proud of the way our guys continued to work and compete through a lot of adversity that comes with being a first year program. Practice could be a challenge due to our low numbers, but they refused to let that be an excuse when competing against larger, more experienced teams.”

The boy’s wins at the GAPPS tournament brought an end to this year’s season. Sigman is looking to build up the team for next year in the meantime.