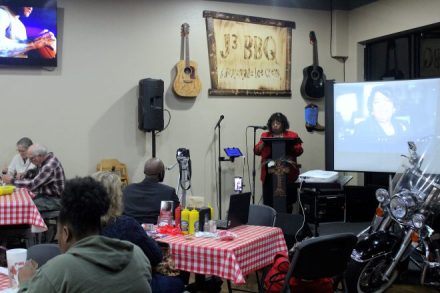 “How many of you are happy with what you’re seeing on the news every day and night,” Congressional candidate Vivian Childs asked at a campaign rally at J3 BBQ Friday night.

It’s an election year, and that means campaign season has officially begun. One of the candidates for this year’s election looking to unseat Sanford Bishop from Congress is author, minister, former principal and former Congressional District Chairman, Vivian Childs, who stopped to hold a rally at J3 BBQ last Friday night. According to Childs’ campaign website, she was also a Surrogate and Grassroots Liason for Trump Georgia’s State-wide Leadership Committee.

“How man of you are happy with what you’re seeing on the news everyday and every night, because of what is happening here in America?” Childs asked attendees. “Fed up with being told what to do, how to do it and when to do it? Being bullied into going against what you believe?”

Among the issues Childs raised included Critical Race Theory in schools, which she denounced as “unacceptable,” to applause from attendees; the current spike in crime across large cities, in conjunction to the defunding of police; as well as her stance as pro-life and pro-2nd Amendment.

When asked in an interview what makes her stand out from other candidates, Childs told the Post-Searchlight, “I stand out, because every aspect of what I talk about, whether it be family, whether it be schools, business, I do that… When I talk, it’s not something I read on the Internet, it’s something I lived.”

She also addressed the issues facing farmers in this district, as well as topics like school choice.

“Just know that I care,” she said. “This is a time right now that people need to know that we care. I don’t want anyone that said that, ‘For five years I’ve waited on someone to come visit me, to see the destruction in this town, and no one cares.’ I care.”