Champions has a nice “ring” to it 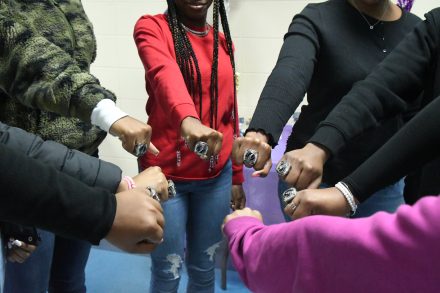 The 8th Grade Lady Bearcats stand in a circle after receiving their championship rings at their celebration and show them off to friends and family.

The Bearcats played Thomas County Central, a team that they had originally lost to twice during the season. This is what made the win more special.

Coach Krystal Enoch was so proud to see the work her team put in leading up to the tournament.

The Wednesday before the region championship was when the Bearcats had suffered their most recent loss to TCC, leaving them only three days before they met eye to eye with them again.

During these three days in between, the team couldn’t practice because there were other events taking place.

So Enoch relied on the girls to stay in shape and rest well on their own. It all ended up paying off.

“We win as a team, we lose as a team, and today we’re going to show them we are not defeated”, Enoch recalls.

The girls gave 100 percent the entire time. A pivotal moment during the game was when TCC started to get ahead in the final quarter, but the Bearcats didn’t let that last long.

Da’Nydia Campbell gave excellent leadership and took control of the game on the offensive side.

There was also Ashley Mosely who did really well at driving the ball away from the opposing team.

Coach loved the dynamic they had, and how they really worked together.

This dynamic led the Bearcats to a 38-27 win over TCC. While the team was excited, they had one last surprise left in store.

A few weeks later, Enoch called the girls to come together at the BMS Coliseum. There, Coach Kimberly Barthel was waiting with goody bags. Inside the goody bags was a championship ring for each girl.

She made each of the girls open their goody bags slowly, before asking them to stop when they got to the bottom of the bag, where the rings were waiting. She then let them all open them at once, much to their excitement.

A rush of excitement went through the girls as they showed off their rings to each other and sent pictures to their friends. The celebration will forever be remembered in the minds of the 2022 Lady Bearcats Middle School champions.