BHS Senior finds passion for nursing through apprenticeship at MHM 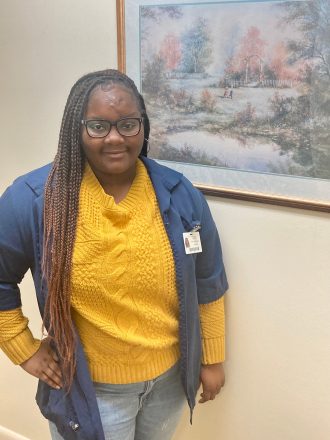 Akevia Daniels is in the youth apprenticeship program at Memorial Hospital and Manor, where she hopes to return and be a nurse one day.

Senior Bainbridge High School student Akevia Daniels was recently spotlighted on Memorial Hospital and Manor’s Facebook page as one of their participants in MHM Youth Apprenticeship. The program, led by Education Coordinator Deborah Brown, exposes students interested in the field of healthcare to various departments within the organization. Daniels has been a part of the program since she was just a freshman and said it has now led her to receiving a temporary position there.

Daniels said she first heard about the program through her cheerleading coach, Mycla Palmer.

“She is the head of it at the school and when I was in my nursing pathway class, my teacher said I should join the apprenticeship program to see if this is really what I wanted to do,” Daniels said.

Daniels agreed and joined the apprenticeship program with nearly 15 other students. She said through the program they are taken to every ward of the hospital, until they find their niche.

Daniels said each student starts in a different ward. However, she started out in the lab.

“I got to see how every department really leans on one another,” she said. “I learned how to calibrate the machines and run tests ranging from TB tests to COVID tests to drug tests.”

After finishing her time in the lab, Daniels moved on to same-day surgery.

During her time in same-day surgery, Daniels said she really learned more typical nursing skills and how to deal with a patient.

“I learned how to be quick and efficient with short-term care, because they are usually in and out within 4 hours and I didn’t get to spend a lot of time with them,” she said.

Daniels then transitioned into radiology.

“I got to dive deeper into the anatomy of the body with CT scans and MRIs,” she said.

Daniels enjoyed radiology so much, she decided to get certified in conducting EKG testing.

Upon concluding her time in radiology, Daniels spent time in Health Information Management.

Daniels said this portion of the apprenticeship included a lot of paperwork, but it is something that everyone needs to go through. Daniels also worked in Human Resources, helping people get hired in their field of choice.

Once Daniels finished all her rotations, she landed on three specialties that peaked her interest.

“I enjoyed radiology, because it was more hands-on and I got to see more non-invasive testing, and because I’m getting certified in EKG testing, it really helped me in the long-run this semester,” she said.

“I got to see a lot of births, including two twin girls be born through C-Section,” she said.

Lastly, Daniels really became interested in same-day surgery, because she believes it taught her efficiency in taking blood pressure and people’s pulses and temperatures.

This vast range of knowledge and interest in specialties puts Daniels ahead of the competition when it comes to nursing school.

“I will already have my Anatomy credits and I have three Healthcare credits and I’m state certified in some areas,” she said.

Daniels knows this would not have been possible without the apprenticeship and encourages all students to get involved in the program.

“Students who don’t know what they want to do in life really should try this program first,” she said. “I went through the hospital, but some students go through Pediatrics and Ophthalmology; it really exposes you to everything and teaches you how to interact with all different types of people.”

With nearly four years of the apprenticeship program up under her belt, Daniels is now being trained in HR to work as a temp for a co-worker who is about to go on maternity leave.

“It’s an opportunity I now get paid for,” she said.

Daniels hopes this is not the last time she will work for MHM. She plans to attend FAMU in the fall, where she hopes to obtain a BSN in Nursing, working in a hospital in Florida, before returning to Bainbridge to be with her family and goddaughter, while working at MHM.