Bearcat Tennis team pulls out the claws at annual Brawl 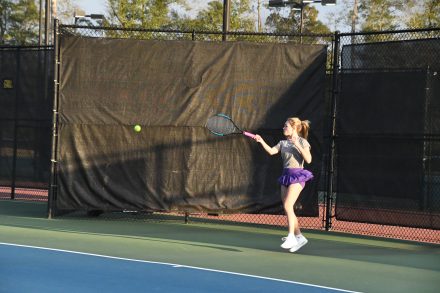 The Lady Cats and Bearcats had a strong showing at the annual Bearcat Brawl. The Lady Cats placed 2nd, while the Bearcats beat out Early County, Seminole County and TCC to claim 1st.

The Bearcats tennis team hosted their annual Bearcat Brawl Tennis Tournament on Friday and Saturday at the Bill Reynolds Tennis Center. Competing against Seminole County, Early County and TCC, the Bearcats came out on top, while the Lady Cats placed 2nd.

The Bearcats and Lady Cats hit the court at 5 p.m. on Friday night for their first matchup of the weekend against Seminole County.

The Lady Cats lost 4-1, with number two singles, Riley Palmer bringing in the only win.

The Bearcats were able to pull out a narrow victory of 3-2 over the Indians.

Number one doubles Aidan Tabb and Joseph Marshall beat out William Fain and Will Waller 6-0,6-3.

With one match down, the team then turned their focus to Early County.

Palmer took the role of number one singles against the Lady Bobcats, winning 6-2, 6-3 against Anna Belle Spooner.

The teams then returned early Saturday morning to face TCC in a non-region game.

With the Lady Cats finished, the Bearcats needed one last victory to tie for first place.

Number one singles Thomas Shockley pulled out a win over Keaton Stephens in three sets, 6-7, 6-4, 1-0.

It all came down to number two doubles Calvin Miller and Jones, who won over Caden Willis and CJ Covington 7-6, 6-2.

With a forced three way tie between the Bearcats, Seminole County and Early County, it came down to lines won, and the Bearcats had the most lines won.

Head Coach Amy Thomas was proud of the overall showing.

“We knew going into the season we had a little bit of growing to do,” she said. “I was pleased with the girls and the effort they put in for the first match; I see a lot of potential.”

Thomas noted that there is room for improvement, but the team has shown an eagerness to learn and improve their skills.

The teams will now play the Miller County Pirates in a non-region match on Wednesday at home at 4 p.m.