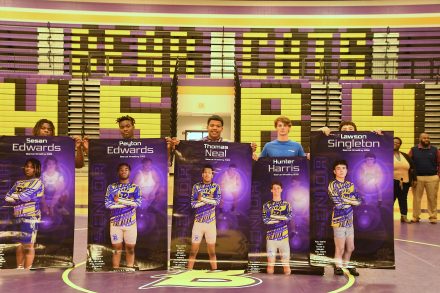 The seniors showed off their senior athlete posters as part of their Senior Night festivities.

The BHS Wrestling Cats had an important week last week, facing off against Leon County at home last Tuesday during their Senior Night match, before going off to state that weekend.

“We overall didn’t have many teams come,” Coach Paul Coleman told the Post-Searchlight of the Senior Night match. “We had Leon and one kid from Grace Christian, just because of COVID and such… We did really good, we had four wins and one loss against Leon.”

Prior to the actual match Tuesday night, seniors Lawson Singleton, Hunter Harris, Thomas Neal, Peyton Edwards and Sesan Edwards were all escorted to the mat by parents and family members, where they showed off their official senior athlete posters that will be displayed in the gymnasium, with Coach Chad Smith giving them some light-hearted ribbing.

As for the state matches, the Wrestling Cats initially went up against Jefferson County and lost, which led to them being pitted against Hampton High School, with the Bearcats winning. The boys were next pitted against Marist, with Bainbridge ultimately losing. “We did, overall, for the group of guys we had, really good,” Coleman said. “We ended up 5th place in the State AAAA… It was a really tough match-up in the first round against the defending State Champs, Jefferson. We’ve got a lot of things to work on off of that match. Then we went against Hampton the next round, and pulled off a very strong performance to get us into the next round.”

The wrestling team will go on to compete in the region tournament in Cairo this Friday, hitting the mat at 10:00 a.m.