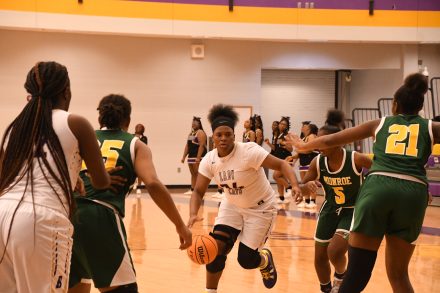 Taralyn Brown dribbles her way through a pack of Lady Tornadoes during Friday’s home game that sent the team into overtime.

The Lady Tornadoes started off the first quarter strong, scoring 7 points, while holding the Lady Cats to zero.

However, the Lady Cats made up for it in the second quarter, scoring 12 points.

Elexis Warner followed up Salter with four points of her own. Angel Peterson netted two points to finish out the half.

Headed into the locker room, the Lady Tornadoes only led by one point.

Coming out of the half, the Lady Cats battled, scoring 15 points in the third quarter.

Following a 3-pointer by Taralyn Brown and a shot by Warner the Lady Cats were tied up with the Lady Tornadoes 17-17 with 6:14 left to go in the third quarter.

Brown then hit another 3-pointer, followed by Courtney Sanders making a basket, once again tying them with the Lady Tornadoes 22-22 with 2:19 left to go in the third quarter.

With only 15.9 seconds left to go in the third quarter, the score was still tied. However, Peterson came in strong, nailing a 3-pointer to put the Lady Cats ahead, 27-24 for the first time in the game.

The Lady Cats scored 12 points in the fourth quarter, while the Lady Tornadoes scored 15 points, sending both teams into overtime.

The quarter started out slow, with the Lady Cats not finding the basket, until 4:48 left in the game.

Salter scored two points, tying them up with the Lady Tornadoes 29-29 again.

Salter went on to score 2 more points in the quarter, while Marquita Jakes made a 3-pointer. Sanders and Brown both finished out the clock with 2 additional points and Warner with one.

Tied 39-39, the game went into overtime, where the Lady Tornadoes came out victorious 50-44.

Warner led in overtime, after she was fouled four times, making three of her free throw shots.

Brown contributed two points to finish out the game.

“We had our opportunities,” he said. “We were winning the game down the stretch, but then we let them back in twice; we didn’t do our job and blew assignments, sending us into overtime.”

Prior to the game, the Lady Cats were tied for first in the region with the Westover Lady Patriots, both being 4-1. However, with this loss, Cochran is unsure what it will do to their ranking.

“It’s a possibility we can still be number one, but I want to take care of business ourselves and not have to depend on other people losing, “he finished.

The Lady Cats will now battle it out against the Lady Patriots on Friday in Albany at 6 p.m.