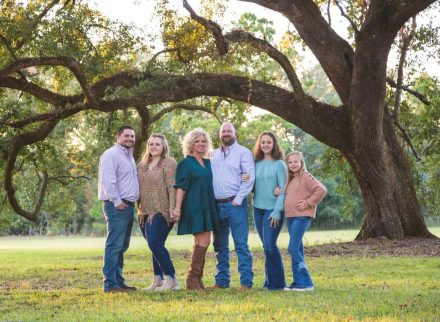 Chelsey Murray Dalton was recently diagnosed with AML, a variant of Leukemia. Both her family (pictured above) and her husband’s families are thankful for the outpouring of support from the community. Also pictured above is her husband, Tyler Dalton.

Sometimes, an event happens that brings members of a community together to support one of their own. One such event has brought members of Decatur County and the surrounding area together: local Chelsey Murray Dalton’s recent diagnosis with acute myeloid leukemia (AML).

Tyler, who works with Decatur County Fire and Rescue, gave his personal account what happened to the Post-Searchlight. “We came up to Blue Ridge for vacation, and we were in the cabin for 30 seconds before we got a call from the doctor, here in Bainbridge,” Tyler said.

According to Tyler, the doctor informed them that, from prior blood work, Chelsey’s platelet count had dropped too low, and they should immediately find an emergency room. Prior to her diagnosis, Chelsey also struggled with Ehler-Danlos syndrome, a rare condition that affects joints.

The couple sought out a nearby ER, but were far behind on the list, so they instead consulted with a hematologist in Canton, Ga. It was then that Chelsey was diagnosed with AML. They were recommended to North Side Hospital for treatment, and Chelsey has remained there since January 3.

According to Tyler, her treatment has been progressing, with the hospital first administering an IV chemo treatment for seven days, which has now progressed to a pill form of chemo.

However, there have been more bumps along the road to recovery. Last Friday, Chelsey was also diagnosed with appendicitis, and while being taken back for an appendectomy, she was informed that her appendix had ruptured. Due to potential medical complications, it is now just being treated with antibiotics.

Of course, medical bills aren’t usually cheap. To help the couple pay them, multiple groups and individuals in Bainbridge and the surrounding community have begun holding various fundraisers to help. These include The Farmer’s Wife, which is selling orange bracelets (orange is the color of leukemia); Lacie McDuffie with Grady County EMS is selling a limited supply of t-shirts, which are only available until January 28; local Alexis Jones has begun making and selling rubber band bracelets; a blood drive will be held in her honor at the Grady County Volunteer Fire Department on February 10; 91 & Main Nutrition in Colquitt has made a drink named after Chelsea, with $300 in sales and donations going to her; and Grady County Fire and Rescue will be donating half of the proceeds from their annual fundraiser to the couple. Grady County Fire and Rescue has also partnered with Decatur County Fire and Rescue and Bryant Funeral Home, with both locations selling tickets as well.

“The community support for us has been amazing,” Tyler said. “It’s been breathtaking to see them support us… You never know who’s got your back until something like this, and it just humbles you.”

The couple have recently found MD Anderson Cancer Center in Texas, which may be able to effectively treat her cancer while also factoring in her Ehler-Danlos syndrome.

Both Tyler and Chelsey’s families, the Daltons and the Murrays, greatly appreciate all the support the community has provided. “The main thing we want is for people to pray,” Tyler said. “Things cold have been way worse, but they’ve kind of gone in our favor at times, and I think prayer played a part.”

For anybody interested in purchasing a raffle ticket for the Grady County raffle, the drawing will be held February 25, 2021. More information on these fundraisers, as well as Tyler’s personal Venmo for donations, can all be found on Tyler and Chelsey’s Facebook pages.

Local landlord becomes first to build apartments with A-1…