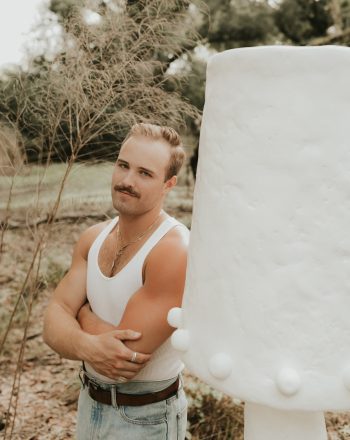 Brent Warr stands with his lamp, a part of his furniture collection, which is on display at the Paris in New York show currently.

In November, Bainbridge native, Brent Warr displayed his artwork at Café Sinclair’s Meet the Artist Event. There, he also discussed his upcoming furniture line that would debut at the International Contemporary Furniture Fair on November 14-15 at New York City’s Javits Center.

His line at the ICFF also led to him being requested at various other shows.

Warr was supposed to appear with fellow designer, Sarah Von Dreele at a private gallery showing in Paris. However, due to COVID-19, the event was moved to New York City and titled Paris in New York.

The show is being held at the New York Design Center January 26-28, and features the work of Warr, Von Dreele, William Storms, Garnier & Linker and more.

The show is by appointment only and really focuses on designers and artists having the opportunity to meet with editors and various publications.

Warr said he is really hoping to meet with Atlanta Homes & Lifestyles Magazine, since he is based in Atlanta, along with Gallery Magazine.

Following his Paris in New York show, Warr will be featured in a group show in March at an art gallery in Miami, Florida. There, he will debut a new chair design, along with an original piece of artwork for the gallery.

Warr’s chair design is not the only new piece he will be debuting this year. He said he will be launching a lighting collection in March, along with more lighting pieces in the summer.

For now, he said he just enjoys spending time with other artists and collaborating with his customers.

“I’m just so humbled and so excited that people are seeing my work and that I’m getting to be with other designers and creative individuals,” he said.

Warr’s parents, Cile and Woody are just as excited.

“We are just so proud of him,” Cile said. “He came home from New York with COVID-19 and got laid off and started painting and making furniture and went full time with it.”

All of the work Warr has created since returning from New York is available for viewing on his website at www.brentwarr.com