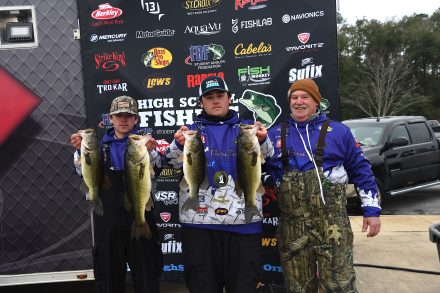 Pictured from left to right, Gage Sellars, Brock Lewis and his father Scotty Lewis hold up the boy’s catch at the GHSA Regional tournament. The two students came in first place out of 200 teams.

Despite the frigid temperatures that descended on Bainbridge over the weekend, 200 boats set out on Lake Seminole Saturday morning, as the first GHSA Regional Qualifying tournament began.

Of the 200 boats that launched that day, containing teams of two, there were only 25 qualifying positions available. Due to the miserable weather, many teams were unable to catch anything by the time weigh-ins began at 3:30 that afternoon. However, three of the six Bainbridge Basscats teams were able to qualify, with Gage Sellars and Brock Lewis taking 1st place with a limit of five fish weighing in together at 20.1 lbs.

Bowynn Brown and Shane Dill came in 3rd place, also catching the five fish limit, which had a combined weight of 14.08 lbs.

Rounding out the BHS teams in the qualifiers were Cy Taunton and John David Bell, who came in 23rd, catching two fish with a combined weight of 3.13 lbs.

“It was tough sledding, it was a hard day,” Coach Roy Matthews said of the day’s weather conditions. When asked if the Basscats’ home field advantage may have helped them, he said, “It doesn’t hurt, but I think, given the weather conditions, that experience played a big role in the two teams that really placed, as well as in that other team that qualified, because one of the kids on there is a freshman, but the other is a sophomore that has fished with us through middle school.” He continued, “So experience is probably what played a big role, especially in those top two teams we had, 1st and 3rd place.”

“I’m proud of the two teams that are really experienced, these guys put a lot of time in… it’s a credit to them and their determination, their commitment to this sport.” Matthews also thanked those that volunteered and supported the tournament, saying “Again, a huge shout-out to the parents and the community for their support. We had parents volunteering, running the bump table there, Bryan Deal was running that… and also, I know for a fact, we had two boat captains, that aren’t dads, that volunteered on a miserable day like that, to go out and not fish. Just a huge shout-out to them.”