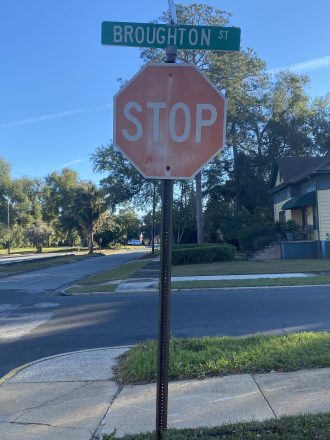 Faded stop signs like the one on Broughton St. will soon be replaced by Hall Contracting.

In February, residents will see a lot of work taking place as the City begins the huge undertaking of replacing every street sign.

The City Council voted in November to accept a bid from Hall Contracting for $320,000 to complete a city wide sign replacement, something that has been on the Council’s agenda for quite some time.

City Manager Chris Hobby said the project is somewhat unusual in the fact every street sign will be replaced, but it is something that is much needed.

“So many street signs were damaged during Hurricane Michael,” he said. “The ones that weren’t damaged were just showing general age, so the Council decided to replace them all at once.”

Although the City Council voted in November to begin this process, Hobby said Hall Contracting is still awaiting some signage. If it arrives by the end of the month, the company will then begin replacing every sign, including stop signs and street signs, in the year-long process.

“We knew it was going to be a huge project with us having so many bent signs or faded signs, which is why we decided to bid it out,” Hobby explained. “We felt like if we did it internally, it would take away from our street crew’s day-to-day availability because of the volume.”

Hobby expects the project to last until February 2023.

Once completed, Hobby said all the new signage will be properly maintained by the City Street Crew.