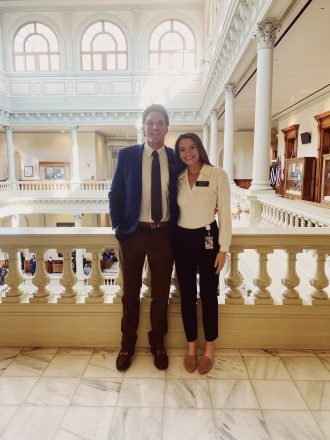 Former Bearcats, Hudson Reynolds and Carah Jones are both working as Senate Aides this legislative session. Reynolds has the opportunity to aid Senator Dean Burke, while Jones aids Senator Butch Miller of Gainesville.

Bainbridge High School graduates, Carah Jones and Hudson Reynolds are hard at work this legislative season, as they are both interning as Senate Aides.

Jones was accepted as part of the Georgia Legislative Internship Program, which offers a full-time paid internship and semester at the Capitol.

The program has been offering this opportunity to Senior and Junior Georgia college or university students for over 40 years. They connect interns with members of the General Assembly during the legislative session.

During the internship, students receive firsthand experience of the legislative process, how state government works and develop lifelong career contacts and friendships.

In her role as Aide, Jones said she and Reynolds are requested to assist in the tasks that need to be done in order to keep the legislative process running smoothly.

Aides also pick up any new legislation assigned to their senator’s committee, including first readers, status sheets and Rules calendars, while also picking up proposed legislation from the Legislative Counsel’s Office.

When they aren’t making copies and picking up legislative pieces, Jones said they often put together folders for committee meetings and attend committee meetings, assisting the Committee Chair in any tasks needed during the meeting.

Aides also have the opportunity to attend functions with their Committee Chair, when needed.

So far, Jones said she has enjoyed herself and looks forward to spending the rest of the semester getting an inside look at how the legislative sessions works.