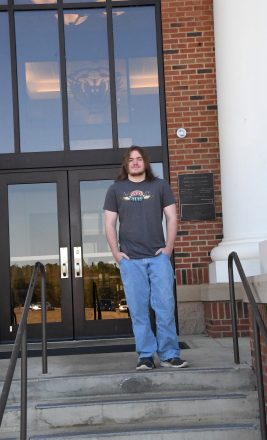 Senior Gabriel Turnage was recently accepted into the Neumont College of Computer Science, after he spent time building his own games through code.

As the old saying goes, if you want something done right, do it yourself. That’s exactly what Gabriel Turnage aspires to do. A senior at Bainbridge High School, Turnage was recently accepted to the Neumont College of Computer Science in Salt Lake City, Utah, where he plans to pursue a Bachelor of Science in Software and Game Development. His reason? Because there were no video games out he was interested in.

“I’ve always been into games, but lately there’s been just nothing that I wanted to play,” he told the Post-Searchlight. “So, I figured if I could make something I want to play, that’d be fun.”
Currently working on a messaging bot for a social media app, Turnage is entirely self-taught, using only YouTube tutorials.

“Just a lot of YouTube in whatever spare time I had,” he said. In an interview with the BHS newspaper, he expressed a desire to work for game company Valve, though he clarified that is not a final commitment. “That was a placeholder, because I’m very open to what I want to do, nothing’s really set in stone.”

It was Neumont College that reached out to Turnage about their program. “They sent me an information booklet, and they said a lot of things that I liked. Three-year college, and I still get a Bachelors in just three years. Of course, I don’t have as much time for breaks,” he said.

Though it wasn’t purely the program that drew him in. “It’s a bit further away, but I was okay with that, because to be honest, it’s a bit too hot down here.”

Turnage doesn’t just have aspirations to be a video game developer though.

“I am going into the Navy for mechanics,” he said. “I figure if I know computer science and mechanics, no matter what happens, I’ll always have a job.” He is scheduled to leave for boot camp immediately after graduation, and will be in the Reserves once completed.