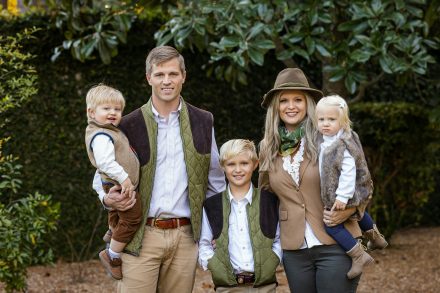 Congressional candidate Chris West smiles proudly with his wife and three children. He is hoping to unseat Sanford Bishop this campaign season.

As the midterm elections draw closer, candidates are kicking up their campaigning. One first-time congressional candidate hoping to unseat Sanford Bishop passed through Bainbridge this past Saturday, hoping to connect with locals as part of a grass-roots campaign.

Chris West, a resident of Thomasville, has never run for office before.

“I’m a bit of an outsider, but I’ve paid attention to the process my entire life,” he told the Post-Searchlight in an interview. “I feel like my background matches up with the new district so well.”

West grew up surrounded by agriculture and working in agribusiness, before moving on to serve part-time in the Air Force and Georgia Air National Guard at Robin’s Air Force Base, as well as working full-time as a commercial real estate developer.

With current redistricting drawing the base into the 2nd district, West decided that now would be the time to try and make his voice heard.

“Our country needs common-sense businessmen and women; it needs people that have felt the effects of inflation,” he said. “I feel my background, my understanding of agribusiness and business in general, our voice is needed in Washington.”

West came through Bainbridge to campaign over the weekend, meeting with local farmers, leaders and members of law enforcement. Some of the items on West’s agenda, should he be elected, would be to better manage spending, as well as aid rural Georgia communities with infrastructure and resources.

“Decatur County has been fortunate with it’s economic development, but some of the surrounding counties haven’t been as fortunate,” West said.

West hopes to use his business experience to improve the economy, in order to provide resources for rural education and healthcare. He also aims to make said healthcare more patient-friendly, and hopes to provide infrastructure to allow rural economic development in the future.

“The voters in the 2nd District are going to see a kind of candidacy with Chris West that is about putting the people of Southwest Georgia first,” he said. “They’ll recognize that our candidacy is the kind that’s going to be successful in flipping Georgia’s 2nd Congressional District, and have a Republican that’s successful at unseating Sanford Bishop.”