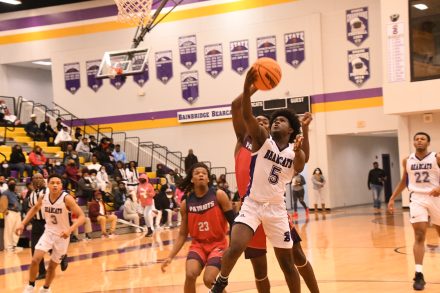 The Bearcats Basketball team is on a roll. Last Tuesday night, the team beat #2 ranked and the previously undefeated Westover Patriots. The team then went on to face the Dougherty County Trojans at home on Friday, where they fell short by just one point.

The Bearcats were on fire against the Patriots, scoring 20 points in the first quarter, while holding the Patriots to only 8 points.

Ked Bryant led the Cats with 8 points, making two 3-pointers and a layup. KJ Cochran followed him up with a 3-pointer of his own and another shot, giving him 5 points.

Deyon Bouie made another 3-pointer, with Dontae Broadnax and VJ Ervin each scoring 2 points to close out the quarter.

The Bearcats let up on defense somewhat in the second quarter, allowing the Patriots to score 13 points, but they continued to dominate on offense, scoring another 20 points.

Cochran led the team in the second quarter, scoring six points on a series of shots. Bouie was right behind him with 5 points of his own and Ashton Parris with 4 points.

Additionally, Broadnax nailed a 3-pointer and Dialan Beard netted a layup to close up the half.

Coming out of halftime, the Patriots were determined to get back on the board, scoring 16 points and holding the Cats to 7.

Parris made six of the points, while Broadnax got one point, making a free throw.

It all came down to the fourth quarter, where the Bearcats dominated, scoring 17 points to end the game 64-51.

Ervin was on fire, scoring 7 points, making baskets and 3-pointers. Beard followed up Ervin with four points, while Bryant had 3 and Bouie had 2.

Head Coach Jeff Page was proud of the team’s win.

“We played an intense game, and even though we made some mistakes our hustle was there,” he said.

Page said he told the players before the game that he wasn’t much of a motivational speaker, but this was one game they could not let up in.

“I was worried that sometimes when you play a great first half, what they might look like coming out in the second half,” he said.

However, the Cats proved Page wrong, keeping their strength.

“There was a little lull, but it’s a game of runs anyway,” he said. “I thought we answered and our defense and rebounds were great.”

Page said he thought everyone had their moments in the game, and he’s just really proud of how everyone performed.

“When you have four in double figures, that means you have to guard everyone and that’s how basketball should be,” he said. “You shouldn’t be able to just zero in on one person.”

Several players were in double figures against Dougherty on Friday night, as well.

Ervin followed them up with 9 points, while Beard and Parris each had 2.

Although the Bearcats lost 42-43, they plan to still keep grinding, facing off against Monroe on Friday night at home. 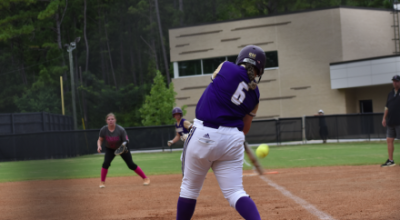