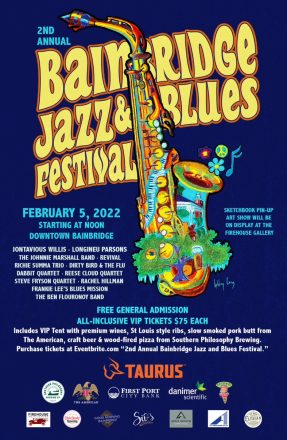 The Bainbridge Jazz & Blues Festival, hosted by The American and Southern Philosophy will feature three stages.

The American and Southern Philosophy Brewing are excited to announce they will be hosting the Bainbridge Jazz and Blues Festival on February 5, 2022 in Downtown Bainbridge.

Tyler Thomas of The American said he is thrilled to be back hosting again.

Thomas said Gallagher Dempsey of Southern Philosophy has been working with the state Department of Transportation and the City locally to shut down the streets surrounding the square, so the festival can add even more stages.

“Now, we have three outdoor stages that will be split up, so anyone who feels uncomfortable around large crowds can socially distance,” Thomas said.

The stages will be set up between the Bean and the Firehouse Arts Gallery, at the Hook and Ladder and the main stage will be between The American and Southern Philosophy.

“Jontavious is from Atlanta,” Thomas said. “He’s big in the Nashville scene and has played with Taj Mahal.”

Thomas went on to say that Longineu Parsons has a feel similar to Louis Armstrong that he thinks listeners will enjoy, along with the Johnnie Marshall Band, who was a favorite at the first festival.

“We want it to give a kind of intimate jazz and blues feel,” Thomas said.

The Festival will begin at noon with free admission. However, those interested can purchase a $75 All-Inclusive VIP ticket that will include premium wines, St. Louis style ribs, slow smoked pork butt from The American, along with craft beer and wood-fired pizza from Southern Philosophy Brewing.

Tickets can be purchased at Eventbrite.com. by searching the date or Bainbridge Jazz and Blues Festival.

“We think it’s going to be really neat and fun,” Thomas said.

One of the fun opportunities at the festival will be a virtual shooting competition held by Taurus.

“There will be a tent set up on Broughton Street and people can shoot a gun, which is really a laser and it will track where you shot,” Thomas said. “It’ll basically be like a big hunter type game.”

Whoever has the biggest score, will win a prize from Taurus.

A sketchbook pin-up art show will also be on display at the Firehouse Arts Gallery.