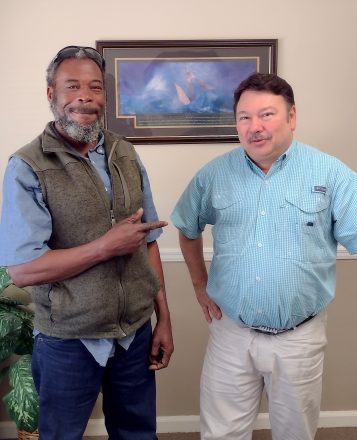 It was like something out of a Christmas movie: a good Samaritan helping a homeless man in need, providing him with shelter, and the community coming together to help as well. But this wasn’t just a movie, this past Christmas it was real, when Rodney Prince paid for a two night stay at the Western Motel for David Jackson. After Prince posted about it on Facebook, Jackson, who is homeless and cleans car windows for a living, received an outpouring of support, which has allowed him to stay warm at the Western Motel up to this day.

“David and I met in either the Winn Dixie parking lot, or the parking lot at the Chinese restaurant… I’d say roughly two years ago,” Prince recounted. “David’s just always had such a nice kind spirit about him, a smile on his face. He doesn’t complain, just his attitude makes it very easy to give him a $10 bill, a $20 bill.”

Around Thanksgiving last year, Jackson asked Prince if he could get him a Bible, specifically one that had Bible stories for children in it, so Jackson could teach them to children. After procuring the Bible, it wouldn’t be until around December 20 that Prince would have the opportunity to give it to Jackson. As they talked, it came out that the blankets Jackson usually sleeps on had been strewn out and soaked in a rain shower.

“I put my blankets up when it starts raining, or first thing in the morning, when I wake up before the sun, if it’s sprinkling, I’ll go ahead and put my blankets inside my bag,” Jackson said. “I came back, it was pouring down rain. I was just going to pass through and check on my stuff, but it was taken out of the bag, it had been laid out to get soaking wet.”

With the temperature dropping to near freezing that day, Prince decided to put him up for two nights in the Western Motel.

“I’ve never had nobody do me like that right there,” Jackson said. “It was like, ‘Wow man, it’s a beautiful little world.’ Sometimes you just have to really just look, and just stop complaining, and look and see what people are doing for you.”

After seeing Prince’s Facebook post, not only did members of the community continue to pay for Jackson’s room at the hotel, they began sending him new clothes and other essentials.

However, the hotel room was just intended to be a short-term solution, as Prince ultimately wants to provide Jackson with long-term housing; and not just Jackson either.

“I personally would love to see Bainbridge have a men’s center, to help men that are struggling, that are homeless, or in other similar difficult situations,” Prince said.

“Bainbridge has several women’s centers that do a lot to help… but from my research, I have not found a men’s center anywhere,” Prince said. “I think there have been some organizations that have envisioned a men’s center, but it’s a matter of funding. In order to jump off on a men’s center, it would require some pretty substantial donations, in order to have a facility for these men to have a place to sleep at night.”

For those looking to support Jackson, room fees can be paid at the front desk of the Western Motel, or they can be contacted at 229-248-8868.