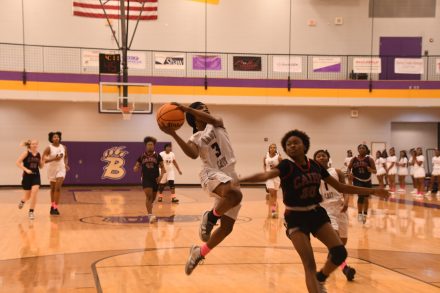 Angel Peterson (3) jumps up for the hoop, while a Cairo Syrup Maid attempts to block in a last-ditch effort.

The Lady Cats are now 3-0 in the region after successfully beating the TCC Lady Jackets on the road Friday night, 53-48 and the Cairo Syrup Maids on Saturday night at home, 59-25.

The Lady Cats started off strong Friday night, leading 14-6 in the first quarter.

Detavia Salter led with six points, while Kirston Noble had six points. Taralyn Brown and Elexis Warner closed out the quarter with two points each.

Headed into the second quarter, the Lady Jackets made a major comeback, closing the gap 22-23.

The Lady Cats only scored 8 points, with Marquita Jakes scoring five of the points. Jakes made the first 3-pointer of the night, followed by a layup. Brown and Salter also scored 2 points.

Coming out of halftime, the Lady Jackets gained a lead for the first time in the game, 35-33.

Salter scored six points, while Jakes scored three points through a series of shots. Warner was able to add a point to the board through a free-throw.

It all came down to the fourth quarter, where the Lady Cats amassed 20 points to end the game, 53-48.

Salter scored nine points through a combination of free throws and shots, while Brown scored 8 points, making two 3-pointers and a layup.

Coach Kelvin Cochran was proud of the win.

“TCC was a big game for us,” he said. “They are a much improved team; they play hard.”

Cochran admitted he knew it would be hard game, especially playing in Jacket territory, but he was excited they pulled out the win.

However, Cochran said the game showed a lack of consistency with the Lady Cats.

“We have some good moments, where we are in the lead, but then we let them back in,” he pointed out. “We just have to get consistent moving forward.”

The Lady Cats led in the first quarter 9-5, with Brown scoring 5 points. Brown made the first 3-pointer of the night, while Noble and Angel Peterson each contributed two points.

Headed into the second quarter, Brown kept on her 3-pointer streak, making two more 3-pointers and an additional shot to lead the quarter with 8 points. Noble and Peterson each scored 2 points again to give the Lady Cats a 21-13 lead.

Coming out of halftime, the Lady Cats’ defense was strong, holding the Syrup Maids to only four points in the third quarter, while they scored 20 points.

Brown led with six points, followed by Peterson and Warner with 3 points. Noble, Salter and Raven Williams added to the total with 2 points each.

The Lady Cats finalized their win in the fourth quarter, adding another 18 points to the board.

Noble and Miyah Willams both scored a 3-pointer, while Salter put four points on the board, through a series of shots and free throws.

The Lady Cats will now face off against the Dougherty County Lady Trojans on Friday night at home at 6 p.m.